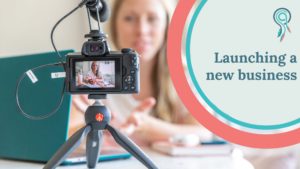 When I was thinking about quitting my job back in 2013, a lot of things were going through my mind. There were ideas of starting up on my own, writing a book, getting a new and exciting job. Dreams of going travelling. Living by the ocean. New and wonderful things.

But there were thoughts swirling through my head that weren’t as inspiring as well. Negative voices telling me that it would never work. Fears of failing in whatever I tried to do and ultimately looking like an idiot. That ‘good girl’ telling me that I should stick to the expected path and keep doing what I was doing.

Some of those fears were real and needed to be addressed. Money of course is always a very real concern: you do need a certain amount of income coming in to pay your bills. Others were imagined or at least exaggerated.

Overcoming these concerns took a lot of work. I devoured books on career transitions and starting your own business. I signed up to webinars and podcasts on each and every aspect of the process. And in a later stage of the transition I started to work with a coach.

Not to say that I’m some guru now without a care in the world! But I’m light years ahead of where I was in terms of confidence in my abilities, my priorities and my overall perspective have shifted so that I know see opportunities in a totally different light, and I’m also equipped with tools and resources that I can use whenever I come up against those blocks again.

I’m pretty sure that I had never heard of things like “mindset” and “limiting beliefs” before this whole process. In the corporate world – and throughout my whole education really – it’s always been very rational, evidence-based and well-reasoned. I don’t remember thinking about any blocks I might have had that could get in the way of what I was trying to do.

I’m by no means a hippy (who dances around naked, you know, with sticks – love you Phoebe!), doing visualisations and meditations and prayers all day long. But the things I’ve read and the people I’ve spoken to have opened my eyes to a whole new world of ideas and exercises that exist out there that can be, and have been, hugely powerful.

Strip away all that jargon and woo-woo talk and the point is that there is a lot going on that can get in the way if you don’t address it head on. The fears and blocks you have will either prevent you from starting your business in the first place or they will prevent you from reaching the success you’re hoping for. You’ll end up sabotaging yourself, whether consciously or not.

If you’ve ever spoken to a coach or read the text on their website, you will undoubtedly have come across the idea of “limiting beliefs”. These are your underlying beliefs – that you’re often not explicitly aware of – that inform your behaviour. They are formed through your different experiences in childhood, often inherited from your parents and rooted in a set of circumstances that were true at the time.

You may think that you want something but your subconscious may be sabotaging you with these limiting beliefs.

In your career and in business, such beliefs might include:

You can have these kinds of beliefs in other areas too. Take relationships and romance:

Can you see how those beliefs can be incredibly limiting and prevent you from getting to where you really want to be? Identifying these beliefs, questioning them, and reframing them as more constructive beliefs will be critical to achieving whatever you’re trying to achieve.

Aside from addressing those beliefs and negative ideas you have, there will also be real concerns that you’ll want to address. Money is one of them: you’re going to want to face up to this head on, saving money so that you have a buffer to allow you to quit your job, knowing how much money you need coming in to break even with your new business, and so on. (For more on this, read Money: What’s important when you’re starting out on your own.)

Building your confidence is about overcoming those limiting beliefs and addressing your mindset on the one hand and equipping yourself with the tools and support you need on the other. Having that savings buffer, partnering with a coach or mentor, taking a course to fill any skills gaps – are important steps to take.