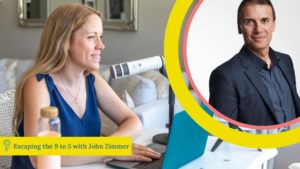 This month’s interview is with John Zimmer, a Canadian lawyer who has transitioned into a new career in public speaking. His answers to the standard questions are particularly articulate and insightful, as you might expect from someone who spent much of his career arguing cases in court and today makes a living as a professional speaker. By now John has had almost two million visitors to his blog, Manner of Speaking, and he has won many international Toastmaster contests.

One of the classic questions we face when changing careers is whether we should quit our current jobs to pursue the new path wholeheartedly, or instead try to transition more gradually by building the new career or business on the side while maintaining our old job. John was fortunate to have first of all built up his public speaking skills over his career in commercial litigation and environmental law, and then to have been able to go down to part time before committing fully to the new career. When he made the decision to go ‘all in’, he knew that it would be viable.

I’d encourage you to watch the video of the full interview, as John shares even more insights here that I haven’t captured in the abridged version below.

How to become a certified speaking professional 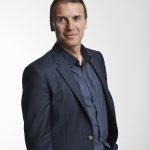 John Zimmer started off his career in a Canadian law firm, working in corporate commercial litigation and environmental law. In 1998, he had an opportunity to apply for an interesting position at the United Nations, heading up a group of legal and scientific experts who were charged with examining claims from different countries suffering from environmental and public health effects when Iraq invaded and occupied Kuwait; John moved to Geneva, Switzerland, to take up this opportunity. When all the claims had been processed, John went to another claims programme at the International Organisation for Migration and in 2009 he moved on to the World Health Organisation where he did internal legal work, primarily with a focus on human resources law. He left in 2015 to pursue a full-time career as a speaker.

Along the way, as I was working at the United Nations, people started to ask me for help with different presentations, as I had lots of experience of speaking in front of courts, tribunals, conferences… I was also a member of Toastmasters International, an organisation that helps people with their public speaking. One of the women I met via Toastmasters put me in touch with a contact at the Lausanne Executive MBA programme who wanted to add a component that would cover presentation skills. So I started doing these ‘little gigs’ on the side, and started to get invited to do speeches at different events. In 2009, I also started writing a blog called Manner of Speaking, which gained good traction and now has followers around the world.

All of these things started adding up to the point where I almost had two jobs: I was doing my work at the UN but in the evenings, on weekends and on my vacation time I’d be doing all these other things.

The decision ultimately came when I was thinking to myself: “I can actually do this as a full-time career.” I love doing it, I love the speaking, I love the energy you get when you really connect with an audience… It’s a great feeling of satisfaction when you see somebody who has a big presentation, or who wants to become a better speaker, and you work with this person and then you see this transformation as they gain confidence and have successes, and you see them grow – it’s really fulfilling.

I actually tendered my resignation to the World Health Organisation already in 2013 and to my surprise they came back to me and asked if I would consider staying part-time. I agreed to 50%, the minimum that you could do, and I did that throughout 2014. That was an interesting experience, and of course there are certain advantages to it – you’ve got the financial stability, you can test the waters… but I really felt that I was getting pulled in two directions. It was almost as if I had a foot on two boats and the tide was taking them out in different directions. So I decided to take the plunge and go full time as of March 2015.

A well-known public speaker, Scott Berkun, who’s written a wonderful book called Confessions of a Public Speaker, responded to my blog post about my decision to go full time with a tweet that said, “There is a power in not doing things by half,” in other words, there’s a power in going ‘all in’.

It’s fine to start, but if you really want to go it alone, there’s going to come a point when you have to say: “Am I in, or am I out?”

It’s funny, when I made the initial announcement that I was going to leave the World Health Organisation, I had a number of colleagues come by the office and they would say, “You’re going to give up all this security, all of the benefits here? Are you crazy?!” They said it in a very well meaning way. Now when I go back and have lunch, I see some of the same people and they come up to me and say, “You’re so lucky! You’re on your own, you’re doing what you love.” So you go from crazy to lucky in people’s minds – of course there’s a whole lot more in between.

Yes, it’s great in so many respects, but it’s a lot of work, there are concerns, there are worries, there are obligations… It looks nice from the outside, and it is nice, but it’s not always easy.

An obvious challenge is the financial aspect, because you leave the security of a guaranteed income coming in every month to really not knowing; if you don’t work, you don’t get paid. It’s the reality when you’re on your own, as opposed to, for example, taking vacation time and still getting pay coming in. In addition, you have to learn a new set of skills – if you’re not administratively inclined, you learn to become administratively inclined very quickly! You have to budget your time properly, you have to be disciplined to get up in the morning, to make sure you’re taking time to do your continuous learning, research and writing, also sending out invoices, trying to get new work coming in…

First of all, my wife Julie was and continues to be a huge source of support for me, as well as my two daughters.

I’m also very fortunate in that I have a very strong network of very, very good friends who are also in the speaking world. They live in different cities across Europe, and we come together to work on events, we share clients… It’s a very supportive group of people and that, I think, is very important: to start building up a network of like-minded people who share the same passions as you. You can bounce ideas off them, you can be there for them, they can be there for you. It’s a very important component, if you’re going out on your own. 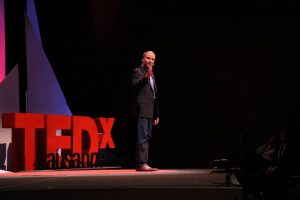 There are so many nice things about it!

The variety – no two weeks are the same. One week I might work with a group of 15 people for a couple of days with one client, I might give a speech to an audience of 150, I might be doing some writing, I might be meeting people and making connections, planning events, and so on.

I also like the fact that I get to meet lots of different people doing what I’m doing. People sometimes ask me, “Do you miss the law?” The two things that I really liked about the law were (1) meeting clients, learning about their business, visiting the mill or the office or the plant or the factory – I always found that fascinating – and (2) going to court and trying to persuade the judge to rule in favour of my client. When you speak, you’re doing the same thing: you’re trying to persuade your audience to take some kind of action, to inspire them…

When you like doing what you’re doing, it is work – but it’s work that you do gladly.

First of all, really be clear about what it is that you want to do and why you want to do it. Just take the time, get away from your office or your home, go out for a long walk, and ask yourself: “Is this something that really fires me up? Is this something that I could really be passionate about, every single day?” If the answer is “yes” then you’re on the right track.

I would also come back to the notion of having a solid network. Meet people in your field, talk to them, help them out. Go into these interactions looking at how you can help others. What I have found is that the more I give away, the more it comes back – fivefold, tenfold even.

Other than that, just constantly keep improving, keep up to date with the latest trends in your field, read, get the books, take the courses… Keep “sharpening the saw” as Stephen Covey called it. Things change quickly and you have to keep changing with them.

You can read more about John on his popular blog, Manner of Speaking, where you can find everything from very detailed analyses of different speeches to quotes, book reviews, and other free resources on public speaking.