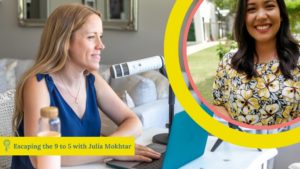 This month’s interview is with Julie Mokhtar, also known as KETOJules, who I came across on Instagram.

She is another of the people I’ve spoken to who really loved her job, so it wasn’t a question of leaving to get away from something terrible. She felt, however, that there was a disconnect when it came to the work that she was doing in her day job and her growing side hustle.

Watch the full interview below or read on to find out how Julie set up her KETOJulies website, how she learnt all she could about entrepreneurship and how to monetise her content, and how she’s now making the most of the freedom, flexibility and fulfilment that comes with running your own business.

How to become a certified keto coach 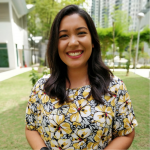 Julie Mokhtar was working as a food editor in Kuala Lumpur when, having discovered the benefits of a keto diet for herself, she saw an opportunity to help her fellow Malaysians implement a ketogenic lifestyle. She set up a website and within two months she had money coming in to the point that she decided to quit her job to go full time. Today, Julie is a certified ketogenic living coach and has a blog, a starter guide and a number of e-books to help people kickstart and sustain a keto lifestyle.

I was working as a food editor at one of the largest digital content producers that we have here in Malaysia, and it was, I would say, a dream job in most ways. My role was to create content centred around food – making recipe videos, brainstorming sponsored content for our clients, and so on. I was happy, I loved it so much, and it was fulfilling in so many ways. I worked with an amazing team, and I had an editor that I really looked up to. So people would ask me, “Why are you going to leave that and work on this new, uncertain thing?”

I think there were two big things that influenced my decision.

The first was that I wanted to be more authentic. Part of my day job was going out to try new foods, and going to food events. At that point, I was already on the keto diet and KETOJules was already there, and so at my day job, I was trying to eat around the carbs. So, at a pizza event for example, I was just eating the toppings – and I looked like the most ridiculous person ever!

I felt like there was a disconnect between me as a career person and then who I was with the KETOJules brand. On KETOJules, I was trying to promote nutritional awareness of how we choose to fuel our body, and so it felt inauthentic that I was there eating foods that were not part of what I felt was great for me. And I had to eat some of these things, because there were times that I had to be talent in the video, and I had to eat burgers and stuff like that!

So I felt that, “Okay, I need to pick which person I want to be.” I naturally gravitated to the keto side of things, because it has made me feel so much more centred, both physically and mentally – and that’s how the decision was made!

I think the bigger reason that made me eventually decide that I had to leave was that we also worked with a lot of food brands that wanted to appear much healthier than they actually were to the public. I really believe in clear branding and transparency and this misleading information that I was helping them put out didn’t really sit well with me. I felt, ethically, that I could not be okay with that, and I didn’t want to be part of the problem. I wanted to be part of helping people and empowering them to make a more informed decision when it comes to their health. So, that was how I decided that it was KETOJules all the way!

I think monetisation was my biggest challenge. I wanted to make sure that I could pay my bills and have some form of sustenance at the end of the month! And although I was producing all this content, I had never actually known how to make money from it.

And so, when I quit my job, I learned all I could about entrepreneurship. I went for master classes, I would be listening to webinars the whole day, and going to seminars and talks. I was getting to know other entrepreneurs and really trying to figure out: what’s the best way for me to make money in the long term?

I was also starting up a few different income generators and then analysing which one was most profitable, and how much time as well as how much mental and physical capacity it would take to generate this income. Because if you want something to be sustainable, you have to look for something where you can make money in the least amount of time with the least resistance; you don’t want to be making money at the expense of your mental health.

Credit goes to my husband, who was my financial safety net at that point. I told him, “Hey, so this is my plan: I’m going to leave my job.” And he wasn’t even shocked, he just said, ”Okay, so how can I help?” He was really there for me.

And my family members are amazing, and I have amazing girlfriends who are always there. They make sure to call me at some point just so I have human interaction when I’m working at home by myself!

Having that support system has been really, really great for me – and that’s really helpful for any entrepreneur, I think.

I’m going to quote you on this, because I saw your video that you did on freedom, fulfilment and flexibility! These really spoke to me on a whole other level, these are the things that I was looking for.

As I mentioned, the job that I had before was fulfilling in some ways, but to be able to have that freedom to make a call on every decision in the business – whether I fail or I succeed, everything is on me right now – I think that is a great thing.

It teaches me a lot and it gives me a lot of freedom in the sense of choosing what sort of content I want to produce. I pick what sort of brands I want to continue working with, that are great for the community.

And flexibility in the sense that I’m free to carve out my work schedule according to how I like it to be. I could work a bit later in the morning and get my workout in first, whereas when I was working before, most of my energy was spent on the job and by the time I came home, I was super tired and I didn’t really want to be doing anything else. It gives me so much more space to really work on all these other things that are also important in my life, like my health, and things like that.

When I was working, I would look at all those people in coffee shops at really odd hours on week days, and I would think, “What do they do? How come they’re so free and they’re here having coffee while I’m at work?!” And I’m so happy that I’m one of those people now! It’s just so freeing, to make your own decisions about when and how you want to work.

Where I am right now, it also carries a lot of meaning in the sense that I am working with people to help them better their health – and I feel like I have more of a purpose.

Make sure that you’re – if not 100% ready – at least 99% ready! I think it’s best to validate your business idea first, to make sure that it’s going to be okay – because if you quit and it doesn’t work out, it’s going be so much harder to bounce back.

So, if you really need to stay at your job first, for the financial security, that’s fine, there’s really no shame in that. There are also a lot of things that you could learn while you’re on the job, and a lot of what I do right now, I learned from my previous job.

So have a plan; validate it; and, when you feel that you are ready to do this, then just go full steam ahead!