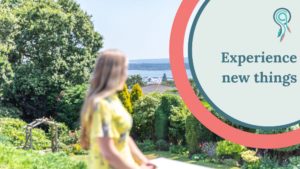 My niece is taking her first steps. She’s a bit unstable, she sometimes falls, but soon enough she’s back on her feet and reaching towards you. It’s scary and it’s uncertain but there she goes, again and again, until eventually she’ll be as stable and as sure as the rest of us as she continues to experience new things.

Somehow we forget what it’s like to be learning something new, doing something we’re not used to. We’re embarrassed when others are watching and frustrated that we can’t do better. As children, we sing as if no one were listening, love as if we’ve never been hurt… But as we grow older, we take fewer risks, we do what we can to avoid getting hurt, and we stay more or less within our comfort zone. We forget that it’s difficult and scary to do something new but that that’s okay, mistakes are a part of the learning process, and if we stick with it we’ll eventually master whatever it is we’re trying to do. 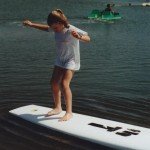 Learning a new language is a prime example. Last year, I was travelling in South America by myself, managing incredibly well with my actually quite fluent Spanish. But meeting a group of Spaniards this weekend I was shy and withdrawn, reluctantly muttering a few words and then heaving a sigh of relief when they changed to English. Same with German: I have an A* GCSE, thank you very much, and I’m far more fluent than I’d care to admit… and yet still I held back, sitting quietly when the group was talking in German instead of trying to participate. (Don’t worry, though, of course everyone speaks English so I wasn’t exactly sitting alone in a corner the whole weekend…) 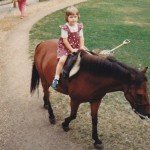 As my singing teacher used to say: it’s the greatest fear of all, the fear of looking foolish. Saying something wrong, making a mistake, not being perfect… It goes back to my school years and the pressure to do well, the disappointment when I didn’t live up to expectations, the desire to always be right and get that “Good girl” reinforcement. 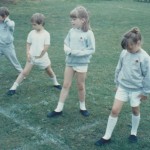 It’s also partly to do with focus and discipline. When I had my sabbatical to look forward to, I knew that I had to work on my Spanish to get by. Just like when I had a half-marathon to train for, I would go running regularly. But it’s so easy to get distracted. I’ve gone back to zero with the running, having not trained consistently for months. I’m no longer listening to Spanish tapes, instead moving on to Japanese. And I haven’t worked on my German in a long, long time… 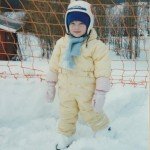 In Leo Babauta’s The Power of Less, he recommends focusing on one thing at a time. It seems like an incredibly slow way of doing things; but compared with doing lots of things half-heartedly, maybe focusing on one thing per month will lead to much faster progress. So instead of trying to start running, learn a language, do yoga, eat more healthily, go out more, read more books… all at the same time, you choose one of those things and do it properly. 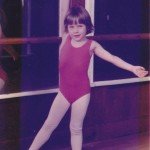 When it comes to the fear of embarrassment, there’s not a lot to be done. Except to buck up and recognise that mistakes and awkward moments are part of the process, on the way to something better. And the more risks we take, the bigger our comfort zone will become. 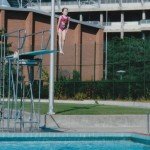 Yesterday we went swimming in the lake in the Swedish countryside and my sister decided that I should go jumping off the platform. I was always the dare devil of the family growing up, but I’ve mellowed out over the years… When I got to the top and saw how high it was, my heart was pounding and I thought: I can’t do this. But she who hesitates is lost, and seconds later I took the leap and went flying through the air. Yeehoooooo!

So bring on the high platforms, bring on the leaps. Experiencing new things is part of what makes it fun, it’s better to have loved and lost, etc… And we’ll only ever regret not taking those risks.

Oh and I’m resolved to start running again after my holiday, and to work on both my Spanish and my German. Before I get back to my Japanese…