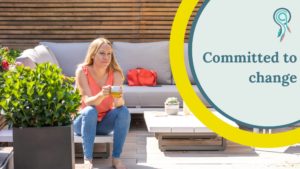 My favourite Star Wars quote has always been Yoda’s words of encouragement to Luke when he’s trying to learn how use the force: “Do… or do not. There is no try.” Trying is allowing the possibility of failure, it’s half-hearted, it’s saying that it’s okay that you won’t end up doing what you said you would. But even when we’re completely committed to change, we’re clear on our goal and we’re feeling energised, we’re 100% sure that we’ll do what we said – even then, how many times has that energy fizzled out and the commitment faded when it actually came down to implementing our best-laid plans?

Our future versus our present selves

A lot of this is down to the fact that we care more about the present moment than we do about some abstract time in the future. It’s the difference between wanting to eat that piece of chocolate cake right now when I’m tired and hungry, and feeling great a few months down the line if I’ve been eating healthily and lost some weight; between lusting after a new handbag now, and saving that money to buy a house or to invest for a comfortable retirement; between reading a book or watching my favourite TV show now, and having invested that time in working towards a bigger goal like learning a new language, writing a book, or launching a business and reaping the benefits further down the line.

So what can we do to help ourselves to stick with the commitment that we’ve made? The obvious solution is to create some support structures that will either make it easier for us to keep to our plan or make it harder to stray from it. This might take the form of an “accountability partner” like a personal trainer, a coach, or a friend. In this way, we are locking ourselves in to a plan that will favour our future self, even when our present self would prefer to do something else.

I once had a flat mate who asked me to hide her sweets so that she wouldn’t be tempted to eat the whole box in one go; she got so angry when I didn’t tell her where they were that I gave up my role as accountability partner and let her have her sweets. At university, my running partner would so often end up texting me the night before a run to tell me that she was too tired that I eventually asked her instead to put a post-it on her door, by which time I would already be dressed and out the door so that I would still go for a run alone. It’s about finding ways to trick yourself into doing what you don’t think you want at that moment!

Do you really want it? Really, really?

In fact, I think a first step before putting in place those support structures is to decide how much we really want something in the first place. What exactly do you want – be specific – and why? – really visualise how you’ll feel if you achieve it.

Most importantly: what are you willing to give up? Let’s say you want to write a book and you’re simply not finding the time. What’s your favourite TV show? Right, you’re going to stop watching Bake-Off / Game of Thrones / whatever it is and use that time to write. What about finally having those six-pack abs? Okay, are you willing to give up carbs for life and go to the gym every day? Hmm, maybe a flabby tummy is not so bad after all…

Thinking about what you might have to give up will help you to understand if your goal is really something that is important to you – above all else – and if you can realistically achieve it. It will also allow you to prioritise the one thing that will really make a difference in your life.

Someone recently suggested to me the following exercise and I think it nicely brings all this together in one simple chart. Grab a pen and paper (old school, I know!), draw five columns, and then answer each of the questions in turn:

As it turns out, most of us will have had a particular goal for at least two years. Clearly this is something that we think is important to us! So what are those obstacles that are stopping us, how can we make it easier for ourselves to keep going, how can we involve other people to support us?

Make it a habit

Once we’ve made a choice, identifying the one thing that we really do want to change, then I’ve come to believe that the answer to sustaining that change lies in creating habits.

If you have to negotiate with yourself every day – okay, I’d rather have breakfast now but I’ll go for a run in a couple of hours; no, not now as I’m getting hungry and want to have lunch, I’ll go this afternoon; oh, it’s too hot now, I’ll go this evening once I’ve digested my dinner; yawn, I want to go to bed now but I’ll go for a run tomorrow morning! – then you’ll simply be exhausted from trying to be disciplined and frustrated because you’ve anyway succumbed to the temptation of the moment. Instead, I think you want the new activity to become as natural and non-negotiable as brushing your teeth every morning and night: shoes on and out the door, of course, I always run on Monday mornings; I’m on the train to work so I’ll put my earphones on and continue with my language course; it’s six o’clock, time to work on my book.

Now, I’m the kind of person who hates routine, I want to mix things up, keep things interesting, do something different every time; but even I have to recognise that a little bit of stability, a little consistency, can be incredibly helpful particularly when we’re trying to establish a new activity that doesn’t yet come naturally to us.

So look back at the goal you identified in the exercise above, and think about how you can break it down into steps that will become as natural as brushing your teeth, getting dressed, having your morning coffee. Your future self will thank you for it! Let me know how you get on…

Some other resources that may help:

Zen Habits by Leo Babauta advocates focusing on ONE THING per month. It sounds inefficient to those of us who have long to-do lists and think we’re good at multi-tasking, but imagine how much you can get done in a year: 12 times one thing is probably more than you’ll achieve if you try to do it all at once!

If you’re interested specifically in how habits can be a useful tool, then I recommend Gretchen Rubin’s Better Than Before: Mastering the Habits of Our Everyday Lives.

And in this Ted talk, which inspired today’s post, Daniel Goldstein talks about the battle between your present and future self and gives the oldest example of a “commitment device”: that of Odysseus asking to be tied to the mast while his crew filled their ears with wax so they wouldn’t hear his cries to be freed and to steer them towards their death on the rocky coast of the island of the sirens.