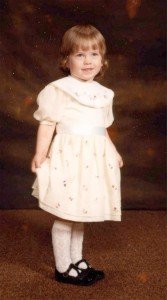 “My name is Anna and I am very long.”

That’s how I introduced myself in some schoolwork when I was little. I wrote my name, okay, and then I decided that my being tall – “lång” in Swedish – was the most important characteristic to highlight. Was that it? This complex human being, full of dreams and aspirations, reduced to a label and a linear comparison with my little English munchkin friends? (In fact, I often defined myself in terms of my Swedishness, which, though important and distinctive, was not my whole identity.)

Yes, I’m feeling philosophical today. Who am I?

The easy answer is to give my name: I’m Anna. But what does that mean? There are countless Annas around the world, what makes me different? And my parents almost called me Madeleine, would that have led to my developing into a completely different person? What if I’m called by a nickname, does that change my identity? My name, though handy for introducing myself and knowing if you’re talking to (or about) me, says nothing about Who I Am.

The other convention in our society is to give your job title. The question “So what do you do?” is the first thing you ask when you meet someone new (although I really enjoyed the “What lights you up?” question that I got a few months ago). But are you your job? What if you have more than one? What if you’re retired or unemployed? Do you lose your whole identity when you quit or you’re let go? Nope, this won’t do either.

This connection to our jobs is not new, of course, and in the past our surnames would have told of our occupations: John Carpenter, Peter Smith, James Baker. Another convention was to inherit your father’s first name, as was common in Sweden: Jonsson, Svensson, Pettersson. Additionally, it was important if you were the oldest son or not, as this would determine your inheritance. Your name also helped to identify your class versus the nobility who had names like Leijonhufvud (lion head), Natt och Dag (night and day), Gyllenstierna (golden star).

Fast forward back to the modern day and we have slightly more exciting job titles. Start-ups have brought all sorts of new roles like Chief Happiness Officer, Storyteller, Marketing Ninja. Websites are emblazoned with things like “Author. Speaker. Adventurer.” We’re digital nomads. We’re definitely getting more creative in terms of positioning what we do for a living! There’s also been a bit of a shift in focus from our job title to the value we’re actually creating. I’ve just read a book, How the World Sees You, that recommended having a motto, a short phrase to describe what you do best. It feels a little unnatural, though, to introduce myself as “Anna, I bring imaginative interpretations and creative problem solving to the table.” Hmm.

Another place to turn to is the world of dating apps, to see what people choose to highlight in the small space dedicated to describing who they are. Some choose to write lists – travel, golf, football, gigs – but do our interests really represent who we are? Some write only: 5ft11, reducing their very existence to a measurement of how tall they are – like me back at school! And some leave the space blank, making you wonder whether they have anything interesting to say at all. (This reminds me of a work meeting where we were all asked to share an interesting fact about ourselves: some people said, “I can’t think of anything…” Oh dear!)

It’s odd that we would actively choose not to have an identity. In Ultimate Hell Week (a show running on BBC2 at the moment), the former Israeli YAMAM operative takes away people’s names and they become just a number. Like prisoners, as in Les Miserables: Jean Valjean becomes 24601. Together with an identical uniform along with shaving off your hair, this takes away all nuance, all personality, and all distinctive traits other than that unique number. What identity do you have left then?

Speaking of Les Mis, maybe we can look to the world of film and literature to find inspiration in some great introductions:

My name is Maximus Decimus Meridius, commander of the Armies of the North, General of the Felix Legions and loyal servant to the TRUE emperor, Marcus Aurelius. Father to a murdered son, husband to a murdered wife. And I will have my vengeance, in this life or the next.

I am Aragorn son of Arathorn, and am called Elessar the Elfstone, Dunadan. The heir of Isildur Elendil’s son of Gondor. Here is the Sword that was Broken and is forged again! Will you aid me, or thwart me? Choose swiftly!

I’m the Doctor. I’m a Time Lord. I’m from the planet Gallifrey in the Constellation of Kasterborous. I’m 903 years old and I’m the man who is gonna save your lives and all six billion people on the planet below. You got a problem with that?

Pretty impressive. Somehow our three heroes manage to communicate the essence of who they are along with a very compelling mission. Boom! What an impact.

Homework for today: write a heroic paragraph that captures who you are and what your mission is. Then practise saying it to people you meet. Why not try a heroic pose to go with it, for effect? Hands on hips, looking off into the distance? Let me know how you get on… 😉