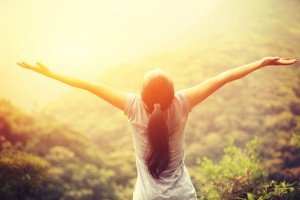 Whenever I’m talking to people about their big dreams, secret ambitions or ‘crazy’ ideas, the thing that’s stopping them is always the same: FEAR. Fear of failing, fear of making the wrong choice, fear of looking stupid.

This is completely natural, it’s part of our genetic make-up. Fear was a helpful attribute for our ancestors: they would hide, or run, from the physical danger, and that way they would stay alive. Today, it’s often less helpful. It makes us nervous when faced with public speaking, it prevents us from trying something new, or from asking someone out, it holds us back from living up to our full potential.

As children, we’re pretty big risk takers. Absolutely everything in the world is new and unfamiliar and yet we approach it all with a sense of curiosity and an insatiable desire to learn. We fall again and again as we try to walk for the first time, but we just get up again and keep trying until we succeed. As a result, we have a very steep learning curve and we’re continuously developing both physically and mentally.

Soon, though, that desire to learn is replaced by a sense of ego and a degree of complacency, a restricted comfort zone in which we prefer to stick with what we know rather than risk failing at something new. We forget that failure is an important part of learning and become reluctant to do things when success is far from guaranteed. There’s a stigma attached to failing, it’s taken to be a sign of weakness and it’s seen as being inherently bad.

But what are we really afraid of?

Fear of failure is perhaps the most common reason I hear for why a person holds back from taking on a big career or lifestyle change. But what does it really mean? What is ‘failure’? Although a common fear, I don’t think it’s very well defined and we often have only a very vague notion of what failure actually is. How we define it will be very personal, based on what we are benchmarking against, who our role models are, what values and beliefs we hold.

Recently Princeton professor Haushofer published a CV of failures (an idea he borrowed from another academic, Melanie Stefan), giving a refreshingly honest perspective on the many invisible failures that often accompany success. Such failures are especially invisible in the carefully crafted personal brands that we are able to present online via shiny social media profiles where we choose which parts of our lives to show to the rest of the world.

In order to keep learning, to keep growing, we have to risk failure, and recognise that it’s a vital part of that learning process and not something to be avoided at all costs. The world is full of examples of hugely successfully people who had many failures:

The Beatles, Oprah Winfrey, James Dyson, Lady Gaga, Marilyn Monroe… These people have all been successful precisely because they failed and because they didn’t give up when they did so.

Related to the fear of failure is the fear of making mistakes. The education system, in Europe at least, encourages this culture of getting it right the first time. Remember my good girl post? “There are too many crossings out,” “Not up to your usual standard,” “A bit far-fetched.” At school we knew the answer before we even carried out the experiment and if the results didn’t fit the curve we would adjust the data until they did. How could we ever make any new discoveries that way?

In Black Box Thinking: The Surprising Truth About Success, the author draws on examples from the airline industry to demonstrate the power of embracing and analysing mistakes in order to avoid catastrophes and make flying ever safer in the future. The same kind of thinking can be seen in the related industry of space flight. In Chris Hadfield’s Life in Space (he’s the Canadian astronaut who went viral with his rendition of Life on Mars up on the ISS), he describes how on returning to earth after a mission the whole team would go through every single mistake that the astronauts had made and how they could handle it better next time. Enduring this sounds quite unbearable, and it definitely takes a level of maturity to take your own ego out of the equation and look at your mistakes objectively.

Perfectionism has often been held up as some kind of ideal to strive for, the ‘weakness’ that we are willing to admit to in an interview as it’s not really a weakness at all (we’re basically ‘too good’). It can lead to procrastination, or avoiding situations altogether so that we avoid possible mistakes. Taking risks, embracing mistakes, and learning from them, is likely to be a far more interesting way of going through life, of innovating and moving forwards.

My singing teacher used to say that this was man’s worst fear: looking foolish. The irony in singing was that not only was it not exactly a life-or-death situation that we were talking about but your hesitation actually made the failure inevitable – i.e. to have a chance of hitting the high notes you had to really go for it! I don’t know if it’s an urban myth but I remember reading that fear of public speaking is the number one fear in the US, ahead of death, and spiders, and countless other real things that there are to be afraid of.

In an Inspirational Presenter training we did at work, we were encouraged to do something really creative, such as dressing up or bringing props or simply trying an innovative approach to our talk. In doing so, we of course risked looking foolish, and the safer option was to go with a standard PowerPoint presentation that would make us forgettable and boring – but at least we wouldn’t look foolish!

You have to ask yourself, though: whose opinion is it that you’re so afraid of? Is it your friends and family, your peers, your colleagues? My guess is that your closest people, the ones who really care about you, are unlikely to laugh in your face if you do something that you believe in. And, if they do, that probably says more about their own regret than it does about you and your ambitions.

Here’s to the crazy ones. The misfits. The rebels. The troublemakers. The round pegs in the square holes. The ones who see things differently. They’re not fond of rules. And they have no respect for the status quo. You can quote them, disagree with them, glorify or vilify them. About the only thing you can’t do is ignore them. Because they change things. They push the human race forward.

In fact, fear often comes hand in hand with excitement – anything that promises to bring about a big change is likely to be both exhilarating and scary. Facing and overcoming our fears is what allows us to learn, to grow… it’s where the magic happens! And if we don’t face our fears, if we allow our fears to win, then what we’re likely to be left with is regret.

So what are you afraid of?