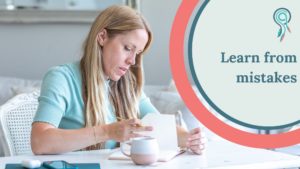 At seven, he had to start working to support his family, and his mum died when he was only nine. At 22, he lost his job when the company he worked for went bankrupt. The following year, he ran for state legislature and lost. At 24, he borrowed money to start a company, which soon failed, and his possessions were seized. When his business partner died, he took on the extra debt. At 25, he ran again for state legislature and this time he won. A year later, he was engaged to be married but his fiancé died, and the following year he suffered a nervous breakdown. At 29, he ran for Speaker and lost. At 34, he ran for a Congress nomination and lost. The following year, he ran again and won, but he couldn’t be re-elected for a second term. At 40, he was rejected for a role as Land Officer. At 45, he ran for Senate and lost. At 47, he lost the nomination for Vice President for his party. At 49 he ran for Senate and lost again. At 51, after a lifetime of failure and loss, Abraham Lincoln was elected President of the United States.

Lincoln served only four years, being assassinated in 1865. In those four years, he led the country through the American Civil War, preserved the Union, ended slavery, and re-established the principles of equality, liberty and democracy.

So many reasons to give up. So many opportunities to feel sorry for himself, to admit defeat, to set his sights just a little lower. Instead he kept going, kept trying, and never gave up.

I’ve written before about the good girl syndrome and being told what to do in school: be careful, get it right the first time, keep it tidy, live up to expectations. Fear of failure, fear of looking foolish.

*The story, by the way, came from a book I’m reading called Lead with a Story by Paul Smith. It’s full of such stories – from politics, from sports, from business including many from Procter & Gamble – and how to use them effectively to make a point.