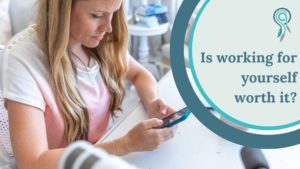 I worked hard in my corporate job. Especially when I first started, I was full of energy and ambition and I would work late nights and weekends to meet tight deadlines and last-minute requests. There would be meetings and conference calls, presentations and training workshops, documents to write, PowerPoint slides to create, and, of course, an endless stream of emails. The pressure was on to perform both against my own work plan and against my peers, in order to get the promotions and salary increases that we were all striving for.

In sharing what I had learned since quitting this job to go independent, I received an overwhelmingly positive response from people who could relate to the feelings and the experiences that I had described; but I was also confronted with a small number of reproachful comments. My favourite comment on the Facebook post captured the sentiment very succinctly: “Millennials!” The implication, I’ve deduced, was that leaving my job was further evidence of the laziness and entitlement of the younger generation, that we simply can’t be bothered to have a proper job like the generations before us, and that trying to do something else would be a foolish endeavour, doomed to fail.

Now there are different reasons why people may choose to quit their jobs and I certainly don’t want to incriminate my entire generation – which varies in its definition but generally includes everyone from my older sister down to new graduates in their early 20s – as a result of my own individual choices and preferences.

Aside from that, however, the criticism is factually incorrect: I’m working harder than ever.

So is working for yourself worth it?

There are a number of reasons why you might work harder when you’re working for yourself.

When it’s your own company, your own name on a piece of work, you’re likely to go even further to ensure that it’s the best that it can be. You’ll almost always over-service your clients, working more than the contracted hours and delivering more than they asked for.

You’re not just doing the “actual” work, you’re also being a web developer, a copywriter, a public relations officer, a social media manager, an accountant…

Those of us who have multiple projects, multiple businesses, will in effect be doubling or tripling the amount of work we have to do to be successful in each of these.

Logistically, you often don’t have the physical boundaries between a work office and your home so the lines are very much blurred and it’s easy to just keep going at the end of the day.

And by the very fact that this is a company that you’ve started, your own business idea and your personal brand, you’re likely to be more engaged and more passionate about the content of what you’re actually doing.

This is not just the case for those of us who have quit full-time jobs to go independent.

Transitioning into a different career, even another full-time position, will inevitably mean working hard to learn new skills, to compensate for your lack of experience, and to prove yourself to your new boss and colleagues.

In last week’s career transition interview, Ryley talked about the culture shock of leaving a corporate job where he was able to switch off when he left the office at the end of the day, into a new world where it just wasn’t that clear cut. Working with his friends, and on the huge issue of plastic pollution and its effect on marine life and human health, he found that it was difficult to ever switch off.

Now I’m not saying that this is a good thing: working ourselves to the ground in a different industry or in our own business is no more commendable nor more sensible than doing so in our old jobs.

In the example above, Ryley is finding ways to work “smarter, not harder”, that is, to make the work that he does do really count. In my own case, I continue to strive for some kind of balance, enjoying working on my business projects but also making time for doing yoga or going for a run, seeing friends and family, and even, GASP, trying to take some time just to relax now and then.

I’m sure there are some people who decide to set up their own online business because they think this will bring in passive income as they lie on a beach somewhere and watch the money roll in; just as I know there are people in full-time employment who do the bare minimum to get by and lack any kind of self-motivation or drive to do a good job.

As always, I would advocate that we each focus on finding the solution that works for our own personal style, interests, and situation and spend less time judging and comparing our own choices with those of others.