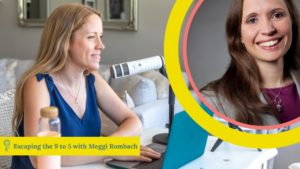 For the third interview in this series, in which I talk to people who’ve left their corporate job for a new career, I’m telling the story of Meggi Rombach, who is just about to celebrate her one-year anniversary in her job at the International Committee of the Red Cross. Meggi is another colleague from Procter & Gamble, and although I was familiar with the headlines of her move into the humanitarian world, I’m so happy to have had the chance to fill in the details.

Meggi’s story resonates with me particularly strongly, and touches quite a nerve. Having focused on development economics and the politics of sub-Saharan Africa during my undergraduate studies in England, I moved to Switzerland to study international relations in Geneva, the seat of the European headquarters for the United Nations and a host of other international organisations and NGOs. I wrote my postgraduate thesis on media and governance with case studies on Mali, Nigeria and Zimbabwe, and got an internship in the communications department at the United Nations Development Programme. And then I took a corporate job in marketing.

Now, I have absolutely no regrets. I learned so much in that marketing job, I met the most amazing people, it opened all sorts of opportunities that I’m still benefiting from, and I love what I’m doing now. But even so I hope that I’ll at some point be able to apply my private sector experience and marketing know-how to the non-profit sector, whether in a pro bono capacity or in a more substantial role in the future. As Meggi describes, it is very difficult to get into the non-profit world, and it takes both skill and determination, and a lot of networking, to break through.

I’m so proud of Meggi and impressed with her perseverance, and her commitment to finding something that was truer to who she was and what she wanted to do. For those of you who are similarly yearning for a more meaningful role and perhaps a less competitive working environment, you’d do well to read on and to follow the valuable and very concrete tips that Meggi shares in her interview. 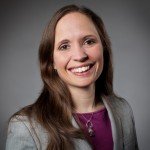 About 14 years ago, in her first year at university studying international business administration, Meggi met Birger. As the son of an engineer working for the German development organisation, he had grown up in various African countries, and talked about his father’s work and life in Africa. Meggi’s own father had told her about the inequalities and the appalling situations many people around the world were living in, and Birger’s stories filled these rather abstract concepts with life. To get first-hand experience, Meggi volunteered in a girls’ secondary school in Kenya during the next semester break. She didn’t yet know the best way to get more involved, but she realised that she wanted to contribute to society somehow, at some point. Life took her on a detour to the corporate world as brand manager, for almost a decade, before she found the path to her current job at the International Committee of the Red Cross (ICRC), where she is now in charge of creating partnerships and raising funds from private companies.

The fast-moving, high-pressure marketing world wasn’t for me; I had known that for some time. Yet, to make me take action, things needed to get worse before they got better: I was extremely stressed at work. I had been under too much pressure for too long and was close to a burnout.  I was miserable and had completely lost my self-confidence. In the same year, P&G offered a sabbatical programme with UNICEF, and I was among the lucky people selected, spending three months in Cameroon as a communication and fundraising consultant. These three months were intense with good and bad moments. The experience gave me a first glimpse of the UN system and a job in the field. On my return, I half-heartedly tried to get back into a marketing role. I knew that it was time to change, and a few months later I took the leap of faith and quit.

Keeping the faith. It’s extremely difficult to get a job at the UN, especially at headquarters, even with several years of experience in a related field, development studies or social science, for instance. Transitioning from the private sector was not going to be easy and was certainly not going to happen overnight. All in all, from the day I returned from Cameroon to my first day in my (paid) dream job in April 2013, it took me two years including a one-year master programme and various volunteering placements.

Looking back, this transition period was a fascinating time: back to school, I met amazing people, learnt something new every day, and extended my network in the humanitarian sector. However, with the end of my financial resources in sight, I started getting very nervous in early 2013. What if my money ran out before I found a paid job? For almost a year, I had applied for jobs at the UN and at NGOs in Geneva and in the field, and played my network wherever I could, without success. I had just extended my volunteering placement with UNICEF when I spotted exactly the type of job I was looking for at the ICRC. I applied, got an interview, then another one, then the job offer, and started in my current role in April 2013 – exactly one year ago. Sometimes, I’m still in awe that it worked out.

My friends and family, and a handful of close friends who were particularly helpful, listened to me, gave me advice, cheered me up, and told me off when needed. It also helped me a lot to have role models, people who had already made the change. A close friend of mine had moved from sponsorship to fundraising at UNICEF. I followed his path and his guidance – I did the same master’s programme and used every opportunity to network and gain experience in the new field I was moving towards.

Networking in general helped me a lot. This has been said before, but, especially when changing to a new field, it’s priceless. I stayed in touch with my professors and guest speakers from university and with people I met at conferences or social events. I’m a curious person and I’m genuinely interested in people and love socialising. You never know where this will take you, and it doesn’t matter as long as you’re enjoying the conversation. For me an important element was that I wasn’t afraid to ask for help or advice – whether from family, friends, professors, or random people I’d just met. Only if you dare to ask can people help you… and I helped others in return wherever I could.

I used to feel like a penguin on land: I could survive and walk… now, I’m back in the water and can navigate effortlessly, although not without challenges. The best part is that I feel that I can be myself and be appreciated for it. In my marketing job, I felt that being a people person was a “nice to have”, while analytical skills and a passion to be the best were much more important. Now, my strengths in bringing people together, being curious to learn everything about our operations, and being open to testing new approaches, are crucial to growing our fundraising unit. Especially when it comes to partnerships with companies beyond charitable giving, we are trying new approaches and I love being part of that journey.

Get clear on what you want, take baby steps in roughly the right direction, and then let go and go with the flow. When I say “get clear”, I don’t necessarily mean on a specific job description. I’m referring more to how you would like to work. I scribbled my ideas on a poster: Make good things outstanding (at least try to)  – connect the dots (people, topics, partnerships) – empower people – get things done – take decisions – work in a nice team (passionate and caring) – facilitate and coordinate solutions – sustainable and scalable change – explore innovative approaches – and so on. I also noted what I absolutely didn’t like or want to do: reports for reports’ sake, long unproductive meetings (talking for the sake of talking), politics, and huge egos.

Of course, I had an idea where I wanted to work: I absolutely wanted to work for UNICEF or for the Schwab Foundation for Social Entrepreneurship. I volunteered with UNICEF and interviewed with the Schwab Foundation, and didn’t get either full-time position. I was close to losing faith at that time. I looked back at my poster and tried to define the job that I was looking for more openly. I realised that I wanted to work on cross-sector partnership, building meaningful collaboration between companies and organisations in the non-profit sector. This new definition made me look more broadly and consider new possibilities. When I least expected it, the right opportunity came up, and things worked out. Today, my job description exactly matches that dream definition!

If you’re in Switzerland, and speak German, you can catch a documentary on SRF tonight, Friday 28th March, at 9pm. You can also read more about the ICRC delegates’ work on this website: Between Frontlines (in English, French, German, Italian).