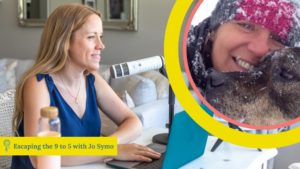 Now that sounds a bit flippant and maybe a bit mad, but the truth is that Jo has been really quite sensible in executing her career transition. She started by taking a few trips here and there, gradually going on more and more adventures, until she had caught the travel bug to the point that she quit her job to join the circus in Australia.

The circus experience showed Jo how many possibilities there were out there in the world, and after another brief stint in the UK working in a leadership and development role, she headed off again, this time for 14 months. She volunteered at a camp for people with disabilities in Colorado, travelled from Alaska right down to Panama, and then headed back to that camp having had an amazing experience the first time around.

When I spoke to her, Jo was back at home doing a five-month contract. This is enough to clear her debts and to pay for the next adventure. As this post goes live, she’s just arrived in Norway as part of an all-female expedition to cross the Finnmark Plateau. Next month, she’s heading back to the circus for a couple of months, and then she has another three-month contract lined up.

I can’t possibly capture our whole chat and all the things that Jo’s been up to in the write-up, so please do watch the full video interview!

How to run away to join the circus 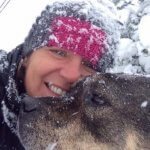 Jo Symo is a leadership expert in the corporate world who helps all levels of managers lead their people to greater success. For a while, when she was tiring of her work, she started going on adventures, travelling… and then joined the circus in Australia! She was the one in the top hat out in front of the tent, bringing people in to see the show. Since then, she has continued to alternate travel and circus antics on the one hand with contract work back in the UK to pay for those adventures.

Well, I think I made a pretty massive change when I left an abusive relationship seven years ago, and I just got my head down, and was rebuilding a life, really. Then, I settled down and I got on a flat, and I kitted it all out again. I made this little home, and then I was going away for lots of weekends. Then, I went to Canada for a while. All the while, it was building in me that I just didn’t want to sit still anymore. I’d been sitting still for long enough.

A couple of things happened at work. My team was made redundant, which meant that I left that business. I got some money coming in, and it all seemed to be pointing in the right direction. It felt like it was time to go and see a bit more of the world, really.

On my last day, my colleagues put up pictures of big tops, and circuses, and people were asking:

I find people are split into two camps, really. Either they’ll say, “Wow, I would love to go and do that!” Or others will ask, “What are you wasting your life doing that for?” Quite frankly, I just ignore those people.

It’s my life. I’ve no responsibilities. I have no children. Why can’t I do what I want to do? I’m not bothering anybody. So I’m ignoring the naysayers, and just going and hanging out with people who want to come and do crazy stuff with me, or just want to hear my stories.

I think it was deciding where to go and what to do. I’m still coming back doing these contracts, and I’m working hard, so I want the money I’m making here to go as far as I can, and to see as much as I want to.

I’ve been very lucky on the money side. My CV is strong, and people contact me about work. I’m not chasing work, which I think is very fortunate, and maybe a bit unusual.

But they keep wanting me to go permanent, and that just fills me with dread. I’ve agreed to three months, and then we’re going to have to talk, because I planned a bit of a European road trip I want to disappear on. It does feel odd to turn work down. There’s that part of me that’s thinks, “Someone’s offering me work. Maybe I should just go and get another flat…” – but no!

I’ve just got the most amazing friends and family, who have stopped rolling their eyes when I say I’m going to do something. One of my friends, who I cancelled on the other day when I forgot I had a mud run on, just responded, “Of course you have! We’ll do it another day.”

I’m incredibly lucky that I have an amazing family who always have a room for me, where I do contribute but it’s the price of having my own place anymore. So, I don’t have to worry about that so much. I live with my aunt and my uncle, and when I came up with the idea of walking across Central America, my aunt just said, “Sounds great. Go and do it. Just be safe.”

I also have my brother, who totally supports what I do, but just wants me to do a bit more work for his business!

I have other friends who live vicariously through me, so will be egging me on to go and do stuff. Then, the more you do… I feel like I’ve got friends all over the world now. So the more I go out and do, and see, and talk to people, the more people I have in different places.

So, I’m really, really lucky that I have all of these people around me saying, “Go for it!” 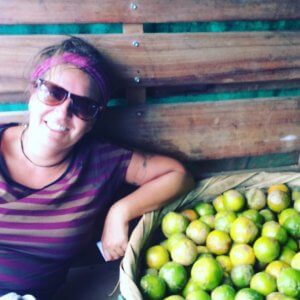 I like the flexibility. I like the fact that when people say, “Do you fancy this?” or when I see something on Facebook, I can just say, “Well, actually, do the dates work?” That’s really what I’m looking at, rather than when I used to sit there thinking, “Oh, I’ve got to pay the rent. I’ve got the bills coming in…”

Also, the amazing people that I get to meet all around the world, who are happy to chat to this crazy English girl, and make me feel really welcome.

Well, when can you?

So just go for it. Give it a go. What’s the worst that could happen? You end up where you were – but at least you’ve had fun trying.

You can find out about Jo’s new project ‘My Great Escape’, aimed at getting survivors of domestic abuse out into the great outdoors for healing, adventure, and a bit of a challenge chucked in as well, on Facebook and on the website. Follow her other adventures on her own Facebook page.