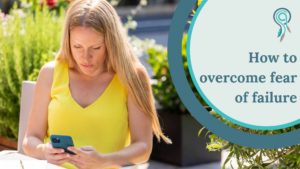 The number one thing that gets in the way of achieving your goals, in my experience, is not having clarity on what those goals are. Number two? It’s FEAR. What are you afraid of? Fear of making mistakes, making the ‘wrong’ choice, fear of looking stupid. Ultimately, these are all variations of one thing: fear of failure.

When you’re little – and you only have to look at other children around you today to confirm that this is the case – everything is new and unfamiliar and yet you take risk after risk and just keep pushing forward. You get up and you fall down, only to get up again and keep trying until, eventually, you learn to walk. You make plenty of mistakes at school as you try to read and write for the first time. You face failure after failure – and yet you just keep going.

Until something happens and you stop. Years of conditioning – through your education, through other people’s warnings and through your own personal experiences – make you afraid. Afraid of embarrassing yourself in front of your peers, of exposing your weaknesses, and, in the end, of being labelled as a Failure.

Fear of failure is perhaps the most common reason I hear for why a person holds back from taking on a big career or lifestyle change. But what does it really mean? What is ‘failure’?

Usually, it’s not something you’ve really given much thought to. In fact, it doesn’t even exist – at least not in and of itself. Failure means failure to achieve something, some kind of benchmark or goal – and yet often that goal, that ‘something’, hasn’t been made explicit. Fundamentally, failure means ‘lack of success’ and, so, as ever, we come back to the question: what is ‘success’ to you?

When you hold back because of a fear of failure, what is the corresponding definition of success that this implies? Where does that definition come from? And is it (still) meaningful to you?

Often, the definition of success and, therefore, the definition of failure is external. It’s inherited from your parents, enforced through your teachers, or imposed by society as a whole. If that’s the case, then you can begin to question whether or not you agree with those definitions.

Whether or not you agree with the definition of failure – and success – that you’ve been working towards, you’ll want to understand exactly what that definition entails. What is the worst-case scenario, that is, the absolute worst thing that could possibly happen?

Really think about this, and get as detailed as possible. Consider finances, living situation, job prospects, and so on. Consider also less tangible things like how you feel as well as less obvious aspects like your relationship with your family or with your partner, which may also be affected. Put down all your worst nightmares on paper and see what that looks like.

The point of all this is to face your fears head on and to work out what it is you want to do about it. Now, a few things can happen here:

Whatever the outcome of the exercise, it’ll be a huge relief to face your fear head on and transform it from something nebulous and anxiety inducing into something concrete that you can actually work with. If it’s about money? Well, then you can dig into the numbers and work out how much you need, what kind of savings buffer you’d like to put in place, what your targets will need to be, what timeframe you’re talking about. If it’s around what other people might think? Then you can work on your confidence, setting boundaries, not taking things personally and staying focused on your path.

In fact, why not also turn this around and ask yourself: what’s the worst-case scenario if you *don’t* take action and make a change? Again, consider your work, your family, your health and your happiness.

No one can tell you whether a fear is valid or not. I can tell you what I’ve seen with clients and experienced on a personal level, and that may be reassuring (or offputting!) to you. You need to look at these fears and decide whether or not you’re willing to work your way through them.

And here we come back to the importance of knowing what your goal is and why it’s so important to you: the only way you’re going to be committed to fighting your way through your fears, real or imagined, is if you’re committed to the goal itself. If you’re not committed, then this is probably not the right goal for you. (Take a look at this previous post on The #1 reason why you’re still stuck and not taking action >>)