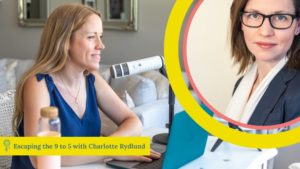 It’s time for the second interview in my series of talking to people who’ve made big changes in their lives, following the first interview last month with Mike.

I am absolutely loving doing these interviews! As one friend put it the other day, the more people you talk to who have made The Jump, the more “normal” it seems. Your world can sometimes shrink when you stay in the same environment for a long time, and your comfort zone along with it. Hearing other people’s stories of risk taking, learning from mistakes, and creating new possibilities, is both fascinating and encouraging. It’s also clear that there is no one right answer for everyone, and we must forge our own path according to our talents, interests and goals.

This week, I’m talking to Charlotte, a friend from my time at Procter & Gamble in Geneva. We volunteered together on the Community Relations board, supporting local children’s charities, while we also had a special Swedish connection via her husband Isak. (Alas, the Canadian side of the family triumphed in last weekend’s ice hockey final, sniff. But Silver aint so bad…) She’s been on an incredibly exciting journey, both physical and emotional, since leaving P&G at the end of 2012…

How to live a fulfilling life 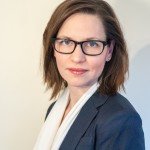 Today, Charlotte Rydlund is a multilingual executive coach, business consultant and avid scuba diver. For almost seven years, Charlotte worked in the international corporate world in Geneva and New York in strategic sourcing, brand management and coaching, and was actively volunteering alongside. Over the years she realised that this wasn’t enough, she wanted more. She wanted to turn her passion for impacting community, society, business and people into a full-time endeavour. She wanted to fully leverage her creativity and entrepreneurial drive while living a balanced and fulfilled life. She wanted a bigger challenge. Quite the wish list! Over the last two and a half years, Charlotte has been working to turn these wishes into reality.


1) At what moment did you decide it was time for a change?

I can’t say there was necessarily one moment, because I had an inkling in the pit of my stomach for quite some time that I wanted to make a change. However, I do recall the evening when I got the motivation to finally take the plunge and make the change: over dinner, a good friend gave my husband and me a book* that altered our perspective on change from thought to action. It sparked new conversation and ideas that led to a more creative approach to how we would make the change. However, it took several more months to figure out exactly what our plan looked like, and how everything would unfold.

*Note from Anna: The book was Tim Ferriss’s The 4-Hour Work Week, and it has inspired others such as Escape the City’s Matt, who started a business book club (great idea by the way!) as a kind of group therapy that allowed him and his friends to explore the changes they wanted to make…

The biggest thing I think many face, as did I, is the question, “what if it doesn’t work?” The idea of possible failure can prevent many from making a dreamt-of change – at least I felt that way. Over several weeks, I came to realise that I had the education, experience, moral support, and finances that I needed. On top of that, I realised the worst thing that could happen was that I would learn something new and I would have to go back and get a job (which isn’t that bad). That was enough for me to move forward.

Most important was feeling and knowing that I wasn’t doing this alone. This was a change that I was going to make together with my husband, and with family and friends cheering us on.

And cheer us on they did as we made our career and geographical change: (1) moving from Switzerland to Canada; (2) founding a non-profit called CANADIVE which mobilises local communities and divers to clean up underwater debris, taking us across Canada spending four months in a tent; and (3) incorporating The Gybe Group, which offers tailored consulting and executive coaching services primarily to small- and medium-sized businesses and their leadership teams.

I’m my own boss. I decide when my work is ready to be presented. I decide how to approach a certain client. I decide whether to take on a project or not. I decide when I am going to work and when I’m going to go for a walk, go diving or read a book. By working from home, primarily virtually, I am connected with clients and partners in Europe, North America and Asia, and I can still enjoy the outdoors and spend time with my family. There is no longer a ‘weekend’ but at the same time I no longer have a 9-5; instead I have a balanced lifestyle with interesting, challenging and fulfilling work.

Think of making the change as a learning experience or an experiment, instead of a change that is forever. By taking small steps and seeing the change as a series of small experiments, you avoid the overwhelming feeling that you can never go back. As I said, the worst that can happen is that you need to go back and get a job.