This month’s interview is with Gareth Martin, who I discovered thanks to his girlfriend Maressa over on Instagram. Gareth is South African, has been living in England for the last 20 years, I met him via his Brazilian girlfriend, and he’s about to move to Portugal later this year!

Watch the full interview below or read on to find out about how Gareth ‘tried’ to leave his investment banking job already back in 2013 but found himself back there before long; how the second time round he was much better prepared, putting in place a plan, learning new skills, and increasing his savings buffer; and how the reality of running your own business doesn’t always match your expectations…

How to become a transformational coach 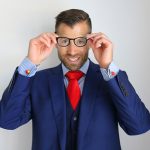 Gareth Martin was an investment banker for about 20 years and really loved his work. Deep down, however, he knew that it wasn’t what he wanted to do for the rest of his life. He left two years ago, thinking he would do something with his long-standing passion of fitness and wellbeing. Today, he is a transformational coach, also running The Ridiculously Human Podcast, and really feels that he has ‘found his calling in life’.

I actually tried to leave… I think it was in 2013 the first time. I’d always had this thing inside me that I wanted to do something else. So, I left, and I went and did all these courses on learning how to build apps and do tech stuff and whatnot… but I didn’t really have a plan, to be honest with you. And, eventually, I came back into banking! I thought, “I’ll just come back briefly,” and it ended up being three years.

But when I went back, I realised, “Okay, I need to have a plan now,” so I made sure that within those three years, I used my time wisely, and I trained up as much as I could in terms of what I wanted to do; I also saved as much cash as I could.

When I left investment banking, I thought I was going to get into the health and wellness space. I trained many years ago to be a personal trainer, and in those last three years, I was training people on the side. I figured, “I’m definitely going to get into this and do some sort of high-end personal coaching.”

At the same time, I felt like a one-trick pony, because I’d been doing banking for such a long time and I didn’t really have a tonne of other skills. So, I said, “Okay, I need a year to go and up-skill myself.” And I wanted to offer something quite boutique-y and unique, not just personal training – there’s so much more to being healthy than just hitting the gym.

I went to India for two or three months, and I trained to be a yoga instructor and meditation teacher; I then came back and studied to be a chef. Then, while I was finishing off my chef diploma, a friend of mine said, “Why don’t you come and do this executive coaching certification with me?”

There’s a real art and science to coaching people properly, and I thought, “I can learn this and apply it to the fitness side of things.” We did the course together and I realised, “Actually, I much prefer this!”

Once I’d finished that course, I thought, “This is definitely what I want to do.” And it was that executive coaching which really changed my trajectory towards the coaching that I’m doing now.

First of all, it takes much longer than you’ll ever imagine.

I think the picture that people have, that I had, for example, was that, “I’m just going to be at home and be able to do my own thing, and I’m going to have so much time!”

And the reality is that, actually, you’re going to work much harder than you probably ever worked in your corporate job, especially in the beginning. And by “the beginning”, I mean the first two to three, maybe even longer, years. It takes a lot to get a business going.

It’s also much lonelier than you think. Personally, I thrive around people, that’s where I feel like I’m in my element. And so, being at home is definitely lonely.

You need to really understand these things and get your mindset into the right place, to be happy with your own company. I’m so happy that I’ve been working on mindsets and trained yoga and meditation and all of these sorts of things, because you get to actually be a bit more comfortable within your own skin.

Also, your network changes. You’re going to have to be ready for some of your friends who don’t understand what you’re doing.

I did a lot of courses, so I met a lot of people through that. There was another course I didn’t mention, as well, the altMBA, by Seth Godin – that was a real game-changer for me. It was online, but it was still an amazing network, and I’ve since met a lot of those people in person.

Like I said, I loved investment banking, but it feels very one-directional. You’re just there, you’re helping the bank earn more money, and you’re not really providing much value in the world. So, for me, there was this huge void. I thought, “Fine, I’m doing a good job, but I’m not actually providing something positive back into the world; I’m not helping people.” I knew I wanted to do that – and, now, I feel like I’m doing that. It’s amazing!

Every single week on our podcast, we speak to such interesting people, people who have done incredible things, and we really get to know these people in such a long-form podcast. We book in a two-hour slot and, for most of the time, we’re basically chatting to them about their life story; and you learn so much about people through their own stories. And for us, Craig and I who run it, it’s been beneficial, selfishly as individuals; but then the really cool thing is when you post an episode, and you have people who listen and who say, “I totally related to that, I found it so powerful.”

So you realise, “Okay, I’m doing something good. We are providing value; we’re helping other people.” And that, for me, nourishes the soul. If we can touch one person a week and help them out, then that is the best thing ever.

And then, on the coaching side, it’s the same thing. You see these transformations in people – people who have a bit of low confidence or low self-esteem, or who are confused and a little bit lost and don’t know how to get to the place that they want to get to – and over 12 weeks, their outlooks and their perspectives on the world have completely shifted. These sorts of things make such a big difference to my life now.

And also, just not having somebody to answer to every day! I feel fortunate that I had some great managers when I was working for the investment bank, but then at the same time, you also have the odd one who really makes your life a misery, and that was the case for one of my last roles for almost two years. Micromanaging for me is just not the way to do it; I’m not the type of person that needs to be micromanaged, and I really disliked that.

It’s just being in charge of your own day, and your own destiny. It’s such an amazing feeling, having autonomy in your life. And now I have a fully online business, so if we want to go somewhere – say, Maressa and I are going to go to Portugal later on this year to live – then we can! I’m not bound by where I need to be. And just having a little bit of that flexibility in your day to go and drop some keys off this afternoon, and have a cup of coffee with somebody, and I don’t have to ask anybody; I can plan my own day around that.

Those are some of the things that I really, really love.

I think everybody in this world has something amazing to share, and I think because of the way society is, it’s kind of ground out of us from a young age. We learn, “Okay, this is how the world works, this is what you must do, you must go and study, you must do this,” and blah, blah, blah.

And you forget to be creative, you stop being creative, and you actually almost forget who you are as a person. And so, you really need to do some inner work first: everything comes from inside you. You need to start understanding, and remembering, who you are, and that you do have something amazing to offer this world.

I think every single person in the world is different, and they’re going to need different things…  But I actually wish that I had had a coach, somebody who had done what I wanted to do. If you can get yourself a coach, that will expedite your journey and your path so much more than you can ever imagine – these people have done what you want to do, and know the pain, and know the struggles, and everything that you’re going to go through and experience.

At the same time, you also need to go and do work yourself: you need to go and join courses, read books. You need to just go and do things, go to events, and find out what is out there. You’ll have an idea of what you want to do, but that’s going to morph over time – it may even become something completely different.

Another thing that I think is super-important is that you need to speak to those people who are close to you. You need to tell them what your plans are so that you get their buy-in, to get them on board. You need to say, “Look, this is what I want to do, and it would mean the world to me if you could provide me with your support and your backing.”

Make sure that you saved double the amount of money that you think you need; and make sure you have a plan.

Find out more about Gareth’s transformational coaching on his website, and have a listen to his podcast, Ridiculously Human.