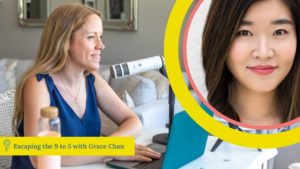 This month’s interview is with Grace Chon, who initially approached me to be on her podcast, Creativity School. When I heard her story, I immediately asked her to come on my interview series as well!

Watch the full interview below or read on to find out more about the two pivotal moments that made her realise that her work wasn’t working for her anymore, the fear and scarcity mindset that initially held her back in her business, and the ‘breadcrumbs’ that she followed towards creative work that felt meaningful for her.

How to become an animal photographer 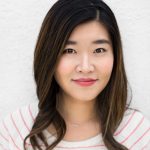 With a background in biology and parents who wanted her to go into medicine, Grace Chon worked hard to get into a creative role, as an art director in a large ad agency in Los Angeles. Although fun and glamorous, she found it to be stressful and a very male-dominated culture. Today, she’s a commercial and editorial animal photographer, and she has published two dog photography books.

There are two very interesting moments that I remember.

One of them was when I was working at Deutsch. Donny Deutsch came into the ad agency in Los Angeles one day to give us a motivational pep talk, and he said something so profound that it stuck with me: it was the idea that if you’re not as excited to come into work on Monday morning, and you’re more excited to leave on Friday afternoon, then you really need to rethink what you’re doing. And I thought, “Wow, okay, yeah I sort of dread Mondays at this point…”

I don’t even think I had the language then that I do now to explain why I felt so unsettled there. I can see now being so young, being female, a d being Asian American, it was a very toxic male culture.

And then I remember there was one night where my partner and I were at the agency until about 12 or 1 in the morning and I was driving home and I thought to myself, “If I got into a car accident right now, this wouldn’t be so bad. Not enough to kill me, but just enough where I don’t have to go to work…”

I realised, “This is not healthy. I cannot be in this work environment – it doesn’t matter how hard I worked to get here and what I overcame to do it – this is not a healthy mindset.” And I had to do something. And that something wasn’t even, “I need to get a new job”. It was, “I just need something to make me feel happy again. I can’t be this miserable and want to get in a car accident coming home from work!”

I’m a big believer in small steps. My whole thing was, “What can I do right now in this situation just to make myself a little bit happier? Because this is not working.”

I decided to start taking head shots of homeless dogs to help them get adopted, and I did this as volunteer work on the weekend. As an art director, I recognised the power of really good imagery. I thought, “Hey, if I can take a really great photo of this dog, I believe people will want to come to a live adoption event, meet them, and then potentially adopt them.”

So, I put an ad out on Craigslist, and I said, “Hey, I’m an art director. I want to take photos for your rescue group. Please contact me.” I found a great group called the Dog Squad here in LA, and I started taking head shots of these little homeless dogs, and people started coming in from everywhere to meet them; those photos were really making a difference.

I realised, “Okay, I need to quit my job and see what would happen if I invested the time and the energy full time into this business!” And people thought I was nuts because this was during the great recession in the United States where everybody was losing their job. People were saying that about 50% of the people in the ad industry had been let go, and I had just received a raise at work because my partner and I had launched a series of TV commercials that went viral. I walked into my boss’s office and I said, “Hey, I’m quitting.” And I did it.

I think the hardest part about making the transition was the fear of not being able to make money and not knowing if I could do this. And that fear was valid, right? We were in a recession… It could be considered frivolous to spend money, hundreds of dollars, taking pictures of your pets.

I was very fortunate to not get pushback from my boyfriend, who is now my husband, at the time; he was incredibly supportive of what I was doing. But I had certain friends who just didn’t understand, and they weren’t interested in what I was doing. At that point, I thought, “Maybe you’re not really my friend if this sounds ridiculous to you and you can’t support me?”

But, for the most part, I think it was just the fear of what was going to happen. And it wasn’t even really that big of a fear, because I felt, “Well, I can always go back to advertising if this doesn’t work out – it’s not a big deal.”

What’s the big deal? If I don’t make money and I “fail” at it, there is no harm. Actually, I should be proud of myself because I took the initiative and tried. I think trying takes more courage than not doing anything at all.

I don’t even think it was called this back then – or maybe it was, and I didn’t know – but it was mindset work; really digging deep.

I have a podcast now called Creativity School, and what I say is that you need to do the work on the inside to make sure you get the best work out on the outside. At the time, I had very organically stumbled into this work and realised that I needed to overcome this lack mentality, this poverty mindset, where I was feeling like there wasn’t enough. “Oh my God, this new pet photographer started, now there’s less business for me!” I think that was a really big thing that I had to learn to overcome, feeling like I was constantly in competition with people. I realised there is enough for everybody, and if a potential client goes to somebody else, it’s because they were meant to be their client. I used to take it so personally: “Why didn’t they choose me? There’s something wrong with me.”

Overcoming that kind of thinking and stepping into a place of abundance, realising there really is enough for everybody, and we’re not meant to get every client out there – I think that helped me so much.

The best part is that I get to make the work that I want to make, that is coming from my soul. In advertising, I was being creative and making things, but it wasn’t meaningful to me. Now, I get to create work that is meaningful to me, and I have such great intention behind it. I get to spread this energy through what I create, and have it impact somebody else out there. I think there is such great power in the fact that I get to be exactly who I am, channel that into my work, and have it impact other people – and I love that.

And, yes, the freedom is a great thing. I’m speaking to you at nine in the morning on a Monday and I’m not in an office! One of the reasons why I wanted to quit advertising was that it just felt like, “How do you possibly juggle a schedule like this with being a mum?” I wasn’t a mum at the time, but just thinking long term, I didn’t have any female role models in the ad industry. I had one actually, I was so fortunate: she was my boss, the creative director. She’s now off being the executive creative director at an amazing agency – but she had a stay-at-home husband to raise their two kids.

I knew my husband would not be a stay-at-home dad, and the thought of juggling that schedule with children… There is zero work-life balance in the ad industry. I would say it’s like being a doctor on call, but you’re not saving lives! To be free from that and to be able to make my own schedule, that is amazing.

But I think the greatest thing for me is that I truly get to make, and share, work that is meaningful.

I would say, really pay attention to what makes you happy. It’s like following breadcrumbs: it’s step by step, tiny little clues. As I shared, it wasn’t that I had this ‘aha’ moment and realised I had to jump from here to there. It was me listening to myself and realising what would make me happy: in this moment now, what can I do that will make me happy? And that little breadcrumb led me to taking photos as a volunteer; and then the next breadcrumb was, “Oh, hey, maybe this can be a business,” and the next… I just kept following each little breadcrumb.

Now, I’m not even doing what I started doing. I started as a family pet photographer and you could hire me for special occasions or just because you wanted lovely family photos. But I followed the breadcrumbs again and became a commercial and editorial photographer, focusing on creating work that’s meaningful to me; and that’s the work that I’ve shot that has gone viral, and that has been turned into dog photography books.

So, I want people to realise that it’s not about having these big ‘aha moment’ epiphanies and having to make giant leaps from point A to point Z. It’s about really going in and paying attention to what makes you happy, and just taking those little tiny steps – because you never know where that will lead you.

I shared how I’m a podcaster now… I never imagined in a million years that I would have my own show; I would never have imagined that back in 2008, when I first picked up my camera. And I think that is the beautiful thing about tapping into your creativity and paying attention to what you like, because it leads you down a path that you cannot even begin to imagine.

Check out Grace’s portfolio of animal photography on her website, and her Creativity School Podcast, where she is sharing people’s journeys towards their own personal creativity (including mine!).