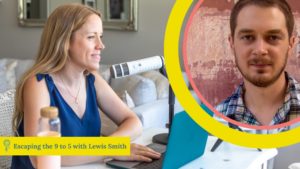 This month’s interview is with Lewis Smith, another digital nomad whose path crossed with mine in Barcelona in October 2017, at the 7in7 digital nomad conference. Here, he explains why he chose to take smalls steps, instead of big leaps, quitting his job to travel the world with his wife.

Watch the full interview or read on for the highlights of Lewis’ story!

How to be an independent app developer 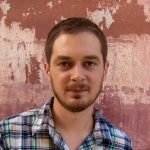 Lewis Smith was happy in his programming role but chose to leave, with his wife, to explore more of the world – starting with Thailand. Initially managing the stress of a variable freelancing income, Lewis now runs his own app development business. Today, he’s a developer and digital nomad who helps people lose weight with Progress Body Measurements app and stay connected with World Time Widget app.

I actually really liked my job. It was a big corporate and the potential for advancement with the company I was at was really nice; they treated me very well. It came in a couple of stages, but really the seed of it all was planted on my honeymoon in Chiang Mai. At the time, it wasn’t known as a digital nomad spot. We were just walking around the town and thought, “We could live here.” Six months after that, we did!

At that point, I didn’t have my app business, but we were going to just take some time off as we had some savings. I wanted to do the apps, but it took five years to get them to a point where they were my main thing.

Before that, we’d never been outside of Europe. Being in Thailand was a culture shock but in such a good way: life was so different, and we really enjoyed Chiang Mai. There was a lot of the world that we hadn’t seen, and we wanted to do more, and see more – that was a big driver.
My wife, my friend and I all gave our notice on the same day.

The ‘feast-or-famine’ aspect of freelancing was hard. It was four or five years before the apps worked out, and income was a constant thing on my mind: “What should I focus on? Will the apps ever be something that I can do full-time? Should I really focus a lot on that? Or should I just embrace freelancing?” Part of the reason it was feast and famine was that I was never spending any time, or as much time as I should have been, looking for freelance work; all my free time was spent on my other business.

Finding the right balance was a big challenge, and I think the main advice I would give is to try not to worry about it. (I know, that is super easy to say!) I spent so much time being stressed, thinking, “In three months, am I going to have this business?” Really, I was never hungry, and it was never shit. My life was always pretty good, and if I’d spent less time with negative emotions about that, I probably would have moved forward quicker.

I didn’t have as much support as I would have liked! My wife Jen was a huge support, but outside of that… I feel like I’ve been a lot better at finding support as I’ve become more successful.
Conferences like 7in7 are a really great way to meet people and to get support. I also ran a mastermind group in Thailand for a little bit and that was really good. I listen to podcasts, and it’s always useful if you can find one that is in your niche or in the thing that you want to do. I don’t necessarily like the business-type podcasts, but just find something in your sector that gives you a good feeling.

It sounds mega-corny, but I think it is the freedom. I feel like I have control over all aspects of my life, like how to spend my time wherever we go. Everything is within my influence, so it’s great to be able to travel and to work, and then to have a few days off – I really appreciate that every day.
Then, the day I wake up after I haven’t done any work, money is still coming in. That is a pretty great feeling!

I think the best advice is to resist the urge to just throw it all – your corporate 9 to 5 – away. That’s the thing I see often, and disagree with the most. Obviously, the urge to jump completely is strong, and I totally get that. I think if you can find how not to do that, and just think, “How could I not jump?” – take one step – I think that is probably my best advice. And you can apply that at any time, to anything: take one step, instead of jumping.

You can find Lewis online at LewisMakesApps.com, on YouTube and on Twitter. If you’re looking for extra support and accountability to lose weight, then be sure to also check out his Progress app.