I’ve just spent a month in Honolulu, where I stayed in a beautiful airbnb with local couple Louise and Kahi. Louise is an air hostess with Hawaii Airlines, also supporting her husband Kahi with his work at non-profit organisation Sustainable Coastlines Hawaii. When they’re not working, like most people around here, they are likely to be found out on the water, catching a wave.

You might think you’ve entered some kind of cult when you meet this group of people, as they are branded head to toe in Sustainable Coastlines caps and t-shirts and most of all they are recognisable as they each carry a reusable bottle. This is one of their most simple messages about how you can help to reduce waste: stop buying single-use plastic bottles, which inevitably end up as trash on the beaches and in the ocean, and instead get yourself a reusable bottle. So easy to do and yet the impact will be huge if we all make this little behavioural change.

I was interested to hear how Kahi first got involved with this project and learned that he had originally worked in real estate. The change for him started when he quit his job to travel the world with Louise, and on their travels he discovered the impact that human beings are having on our environment.

Today, he lives with his wife in a great house in Kaimuki, making a living doing something he’s passionate about, having the opportunity to travel to the most beautiful places in the world, and making a difference while he’s at it. The good news is that he says it’s easier than you might think! Watch the full video below, or read on to get Kahi’s take on his own transition – and how can you do it too…

Leaving a corporate job behind to follow your passion: From real estate to saving our oceans 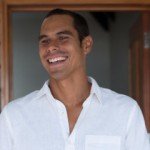 Kahi Pacarro used to help run a real estate development company, leaving his job in 2008 to travel the world with his girlfriend. Today he’s the Executive Director of Sustainable Coastlines Hawaii, a non-profit organisation that runs beach clean-ups as well as various educational programmes and public awareness campaigns to help to reduce waste and keep Hawaii’s beaches clean.

The main change was realising that I could make a living out of this. When people think of non-profits, you think: How do they survive? How do they make it work? But if you work hard enough, make the right connections, you can figure out how to sustain the organisation. So the point where I really said, “Okay, I’m going to make this my career,” was the point when I realised that it was sustainable.

[tweet_box design=”box_07″]You really take a huge sacrifice in the amount of money that you make versus working in the corporate world but the return on your investment of time is so worth it.[/tweet_box]

You really take a huge sacrifice in the amount of money that you make versus working in the corporate world but the return on your investment of time is so worth it. Getting to travel around the world, getting to see that you’re making a difference, actually see tangible differences from the services or programmes that you provide on the people or the environment, is well worth it.

Without being paid to do this, it’s not sustainable. The trick is really showing how much worth your time is to the funders so that they understand that paying someone to run the organisation is probably one of the most important investments that they can make into the non-profit organisation.

Money is the thing that makes it sustainable but it’s the passion that really drives the organisation. Surfing remains a common theme: we spend so much time in the ocean; we want to see it clean. You look at surfing and it’s one of the only sports where you’re so into your playing field. You could just stare at it for hours, you can just swim in it, you don’t have to be surfing; it brings you so much joy just to be out in the ocean. Surfing is really the driving force of Sustainable Coastlines Hawaii, and also of Sustainable Coastlines New Zealand.

The original support really came from having savings from my previous career. After that, we looked at other ways we could raise money, personally. Airbnb has actually been a really big help and continues to be a big help. Also Louise was working and I was doing consulting jobs, using my past expertise.

At that point it was about starting to write grants – and then the money started coming in when people believed in what we were doing. It’s a pretty easy sell: take a bunch of people out to a coastline and make community service fun! It wasn’t too much of a sacrifice, because the money came in really quickly.

I think the real key is relationships with other people, being able to sit across from the table from somebody and listen to what they have to say. Take away egos and create a friendship before you get the business going. I think a lot of our success has been in having good partnerships and being nice to people. That’s one of the easiest things to do: just smile more and be nice!

And realise that you’re going to get a lot of rejections but in those rejections you end up growing, learning why you got rejected, and you can improve on that the next time. Especially with a non-profit organisation, the first year when you write grants you usually get rejected, every single time. Then the next year you might get it, or the next year. It’s persistence; they want to see that you’re a tried-and-true organisation that doesn’t give up.

The best part of my life is having a place like this, getting to spend as much time as I can with my wife and soon-to-be little girl.

Other than that, it’s getting to travel the world and surf. Going on surf or snowboard trips – you can turn it into a way to spread the message, turn it into a work surf trip. I just got back from the Maldives doing that! Figuring out how you can leverage your new knowledge to educate people abroad to effect change on a larger scale. People want to hear these messages, all around the world. If you can identify who those people are and leverage their network, a lot of times you can get these trips subsidised or paid for in their entirety.

The best thing to do, especially if it’s something like travelling, is just to go and buy your ticket. We’re only on this earth once, we might as well make the most of it and not get caught up in the minutia of constantly worrying about our bills. Taking that leap of faith and just watching everything fall into place – or not, and learning from those mistakes so that you don’t do it again. For me, it’s just buying the ticket to go. Once that’s happened, you’ll find a way to make it work.

[tweet_box design=”box_07″]For me, it’s just buying the ticket to go. Once that’s happened, you’ll find a way to make it work.[/tweet_box]

Don’t ever plan anything! Plans never work out, they should be called “guides”. The best plan is to not have a plan. Especially with beach cleaning, with 1,000 people on a beach, nothing ever goes as planned!

The other one is, “It’s easier to beg for forgiveness than to ask for permission.” Sometimes just go and do it! But you have to understand the heavy risks involved with doing that. I wouldn’t say put yourself in danger any time – but there are certain cases where getting caught up in red bureaucratic tape will just hold you back and it’s better to just go for it. Usually everything is fine.

So just go for it. Buy the ticket. Find a lifestyle that allows you to make less but travel more, or make less and spend more time with your family. You’re only here once – spend it here doing stuff you like, versus making money for someone else.

Are you thinking of quitting your job, changing careers or starting your own business? Find out more how coaching can support you in this transition.