When I spoke to Neil back in October, he was in the middle of quitting his job and growing his business, documenting his efforts on the website WatchMeQuit.com. As 2017 continues, he’s now just days away from taking that final step.

Neil has known that he’s wanted to have his own business for quite some time but it was only in the last few years that it really clicked and he realised what he would do to bring his passions together. He set himself an income goal to reach by the end of 2016 and for added accountability he told the world that he was going to quit!

Leaving a corporate job behind to follow your passion: From Project Manager to Online Marketing 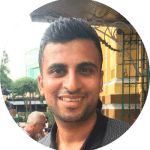 In what he calls “the boring part” of his life, Neil Sheth has been a project manager within investment banking for around ten years. On the side, he’s been growing his online marketing business first via a done-for-you solution and second via coaching. In order to give himself accountability to quit, he made a website to Watch Me Quit as he worked on reaching his income goal by the end of the year…

I’ve wanted to do my own business for about ten years. My first business was when I was at university while I was studying, and when I went into my first job after graduating I was excited but after a number of years that excitement goes down and you start realising: this is what it’s about, every single day. I started launching websites and doing marketing for myself, making money online. I really took it seriously around three or four years ago when I was working very long hours at Goldman Sachs and decided that I couldn’t keep going to work and trying to do this on the side.

At that stage, I was still doing my own websites and thinking, what could I do as a website that could work really well? I was making a bit of income online but it was never enough to quit my job or to be passionate about it and throw myself in it. Coincidentally, at that time a few businesses started asking me for advice. My wife had been pushing me for a few years to help other people via an agency or coaching and then I really understood that I’m massively passionate about business and digital marketing – so it was staring me in the face. So I started doing it seriously about two years ago, and it’s the last year that I’ve really started picking up clients.

Funnily enough sales was a bit challenge for me. I thought I was great at sales, because my first-ever job was selling windows on the phone and I thought I would need to focus more on what I’m not good at, which is the technical side and making sure I have procedures and processes in place. But I’ve just found sales to be a whole different thing – I started off by giving my price as soon as possible, jumping into it right away and then they just weren’t interested to catch up afterwards. I wasn’t taking the time to build a relationship or to build an understanding of their business (and it took me a painful year to realise this!). When you do that, the price conversation just gets put to the side and the question becomes: when can we make this happen? The price is then a secondary consideration.

I’ve got a good network over the years of people who have created an online business or who are in business themselves and that generally is my “go-to”. I’ve even got friends who have specifically quit their jobs to build a digital agency so it really helps to speak to people who are in the zone, doing what you want to do – not necessarily the same business. There’s a certain way of thinking when you’re starting your own business and going to work in investment banking, for example, I would be met with blank faces.

There are also Facebook groups out there where you can ask questions and just get some outside opinion from people who aren’t in it every day.

And I read a lot, I have a lot of time on my commute – not necessarily books but really good articles or emails that I’m signed up for – as well as listening to podcasts at the gym, which also gives an added incentive to go to the gym in the first place.

I would love to say that I get to travel, be on the beach and run my business – and obviously I haven’t left my job yet so maybe it’s still possible… But I would say that in the last few months it’s really become serving people, getting a testimonial or a review from someone who’s really passionate about what you have done for them. I work with a lot of businesses who are passionate about their business, and when I have a business that turns around and becomes passionate about the online marketing that I’ve provided them is, that’s the best experience. Seeing someone go from not really understanding it to actually having a focused mindset on delivering quality digital marketing, as well as the relationship and the friendship that comes out of that – that’s been the most rewarding experience.

My wife said it the other day: this is the first thing you’ve done in the last ten years where you’re actually helping someone. And I think that’s the difference, when you’re doing a business. Stop thinking about making money and enjoy helping people.

Watchmequit.com has been awesome. I’ve had a few people reach out to me asking great questions, and the best thing has been going through the journey with other people so it doesn’t feel like I’m alone. It’s all about people, to summarise.

I would say there’s no better time to start than now. I don’t mean quit now, but start your business now. If you really want to do it, you have to understand that it requires a lot of commitment, a lot of persistence and a lot of drive, and there will be times when things just aren’t going right… It’s a bit like a bus in London: you’re waiting for it for such a long time and then two will come – you’ll find moments like that when you’re growing your business and there will be those down days, then something will happen and something else will happen!

I think a lot of people are asking questions around them, and what they want to do; and I would say it’s more about who you want to serve and the problems that they have. If you follow that path and you put that first – and that’s where the relationships and the people come into it – then what you’ll find is that you’ll end up creating a good business. A business that you care about, a business that you’re passionate about, and a business that other people will rave about to. That has made the biggest difference for me in the past year.

If you specialise in a particular skill, put it in front of people – rather than just brainstorming, go and speak to people and actually have that conversation, and get some feedback!

You can find Neil on Watchmequit.com (for the next few days!) and on his two business websites, Onlywayonline.com and Yourbrandfound.com.