This month, I’m happy to share an interview with Joanna Gaudoin. She has a similar story to mine in that she got into marketing ‘accidentally’ at the start of her career and is now running her own business.

Having decided that she wanted to change career direction, part of the process of discovering what to do next involved working with a career coach. Rather than coming away with the one secret answer to what was the perfect job, she did a lot of important work on identifying her skills and her fundamental values, as well as defining two key criteria for the right career for her personally: (i) doing something different every day, and (ii) helping other people develop in their careers. She has also worked with different business coaches at different stages of her business, recognising that you can’t do everything on your own and you need to look for the right kind of help as you face different challenges throughout your career and business development.

As do many of the entrepreneurs and coaches I’ve interviewed, Joanna particularly enjoys the flexibility that this kind of work allows her, as well as the close connection that she has to her clients and being able to really see the impact she’s having in their lives.

I’d encourage you to watch the full 30-minute interview as there are many more insights than I could possibly fit into the written version!

Leaving a corporate job behind to follow your passion: From marketing to making an impact 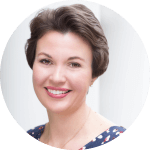 Joanna Gaudoin started her career in marketing in “the glamorous world of toilet roll, tampons and nappies” at Kimberly-Clark in Paris after university, after which she worked with puppies on Andrex in the UK. Getting itchy feet out in Kent and having ended up in marketing by accident, she decided to move to London where she worked in various consultancies. On her husband’s recommendation, Joanna worked with a career coach for six months while volunteering and continuing with some freelance work. Discovering that she wanted every day to be different, that she hated sitting all day at a desk, and that she wanted to help people get the development they needed to get what they wanted in their careers, she first trained as an image and impact consultant. Having established her business end of 2011, she has now broadened her offering to help her clients make a positive personal impact and build relationships at work.

I made a bit of a funny leap and went and worked for a consultancy in merger and acquisitions, commercial due diligence. I have to admit that was the worst however-long of my life! It was a disaster. The environment didn’t suit me, there wasn’t much people contact, very dry… I remember one of my first tasks being,“Can you estimate the global market for mechanical seals?” I didn’t even know what a mechanical seal was! I worked there for around a year and half and was thinking, “What on earth do I do now?”

Then the market downturn came and I had to try and cover up my joy when they told me I was going to be made redundant. So I got paid to leave, when I’d been thinking about how to extricate myself from there! I spent three months doing a bit of volunteer work, looking for a new role, and then did what I call my final corporate job in a small consultancy again. I liked the team, it was a nice location in London, it worked very well; but unfortunately some of the directors decided to split off and do their own thing, and they couldn’t afford to take the whole team with them. Months went by with clients going, not really knowing if we would be paid; that was a very difficult time. And then we ended up being integrated into a business that we used to recommend to clients, so we had to change the model of what we did because we weren’t impartial any more. That was really the point when it crystallised for me that the work wasn’t right, there wasn’t enough client contact, the work was too conceptual…

My then boyfriend, now husband, suggested that I work with a career coach. At that point, six years ago, coaching wasn’t as mainstream – I think it’s a really good thing that that’s changed. She was excellent, and focused on career transitions. She worked with me over six months to help me work out what I was good at, what my values were, what I was interested in, and so on, through lots of different mechanisms and exercises that I’d never done before.

I had intended to carry on working but I have to admit that after two months I’d had enough and one Friday afternoon I just decided that I was going to quit; and on the Monday, I quit! 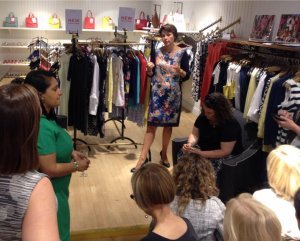 Definitely not knowing what to do; and where to get started. A lot of people just start up a business in the field they were in before. I’m not saying it’s easy but they know what they’re doing, they know the industry, and they can potentially pull a few clients. The challenge of saying: “I want to do this, I see the value of it… how do I get going?” That for me was where I started networking, networking, networking!

Actually, that’s my challenge at the moment: 80-90% of my work comes from networking referrals. It’s a great position to be in but it makes it very reliant on you being out there and doing all that as well as preparing and delivering work, doing marketing, admin, and all the rest. So one of my challenges now is looking at how I reduce that and get work from more sources.

I think you have to be continually evaluating how you need to develop yourself, and what support you need to do that. During the five years or so that I’ve run my business, SABMiller asked me to go back as a part-time contractor – I ended up back there for nine months, full time, and that derailed my business slightly. At that point, I worked with a business coach and she really helped me focus. And now I’m at another point where I need a different amount of help and I’m going to work with someone different to do that. So you start with something but it’s being open to how that’s going to grow and develop; and you need to think about who can support you at different times to get there – because you can’t do it all on your own!

I became an associate with a company called Voice at the Table two or three years ago. I’d met the lady who owns that previously, when she was still in a corporate job, and she then contacted me when she was setting up her own business. She works with a network of associates, and some of those people have become friends and are very supportive. For instance, I trained in a new area this year, Positive Political Intelligence, which is the first bit of work that I now offer that is based on a diagnostic tool; and I ran my first tester workshop with that group, from Voice at the Table, to practise and to get their feedback.

I’m hoping to start an accountability group with another lady I know from networking… I think you just find people! We have really honest conversations about our businesses and that’s really valuable. 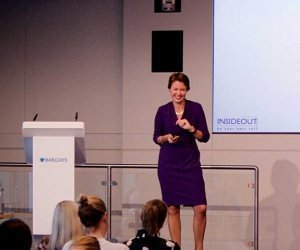 The ‘aha’ moments when people get it and they see the impact that change can have. I emailed a client yesterday – I’d only had three sessions with him and there was quite a lot to work on. I asked him and his boss how things were going, and I got an email back from her saying that, yes, he presented something yesterday and it was so much better than before, and he said he felt it went well too. So it’s really amazing when you see the impact you can have on someone else’s life.

And the ability to organise your own time and just enjoy your life a bit more! One particularly lovely Friday afternoon a couple of weeks ago, I decided to do a few hours of gardening and then pick up my work at the weekend when it was going to rain. It’s about balancing doing work you enjoy, earning what you need to, to lead the life you want.

Definitely get some external support. Friends and family can be helpful but they almost know you too well.

I was very fortunate, I’d sold a flat when I was younger and so when I started my coaching I didn’t have to work as I had a few months of savings to live on – if you can do that, and throw yourself full-on into it, that is the best way. Otherwise you just don’t end up doing it, because you’re doing a full-time job. Think about what’s realistic for you.

Also, formal training is really important to me; but sometimes people spend too long getting all the right training in order and not actually getting going with anything, and I’ve found adding things as I go along has worked much better for me. So really focus on: let’s start with this, and let’s build from there. It’s easy to lose time doing stuff that’s really not going to do anything for you. Done is better perfect!

Have you made big changes in your life and want to inspire others to do the same? Get in touch to share your story!