This month’s Fearless Fridays interview is with Amber Slaughter, a life and executive coach based in Houston, Texas. She had actually studied organisational behaviour and executive coaching and had been coaching already on the side since many years, but it was only when she got that extra little ‘push’ from the universe that she overcame her fears and decided to really go for it.

I love the points she makes about fear: first, that not all fear is real and sometimes we simply need to recognise that and push through; and, second, that if we can accept the worst-case scenario then we can also keep moving forwards. Fear will never fully go away so we need to find ways to manage and address it. (For more help on this, check out my 5 Days to Fearless mini-course.)

For Amber, working independently as a coach means doing something that she loves. It also means that she is in control of her own schedule and, most importantly, that she can spend quality time with her son.

Read on to get her story, or watch the full video interview here:

Leaving a corporate job behind to follow your passion: From IT and project management consulting to empowering women as a life and executive coach 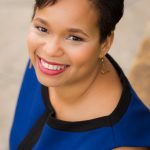 Amber Slaughter was working as a consultant in IT and project management, managing software implementation and infrastructure changes – all the “fun things” as Amber says! – but really she wanted to pursue her coaching business full time. The universe finally gave her the signs she needed and today she works as a life and executive coach. She primarily supports women (although she also attracts a lot of men, who she says are more likely to recognise that they need help and to seek out a coach), freeing them of the notion that they somehow have to seek permission to live a life on their terms and that they love. That can be within an existing career, everybody doesn’t have to take the entrepreneurial leap. After some initial success, Amber is now working on consolidating her business and continuing to grow.

The moment was decided for me!

I had been coaching since 2009, after I got my masters degree in organisational behaviour and executive coaching, and so I was doing that on the side. I realised that was what I wanted to do; but the umbilical cord to that every-two-week pay check is very strong and difficult to give up to become an entrepreneur. So from 2009 until early 2016 I held onto that corporate pay check.

I started contracting and the budget would go away, the project wouldn’t get funded, or they no longer needed the project… It was just a series of things that happened over the course of the last six or eight months that really told me: okay, this has to be a universal sign that it’s time to do something different. At that point, I said I really want to do this full time, this is what I love. When I was willing myself to get out of the car to go to my office, I knew it was time for a change – I just didn’t realise the change would come so quickly! But the universe responded quite quickly and I got laid off from my latest project. I finally said, “I get it! I hear you, I’m going to do it – let’s figure it out.”

So it was a push. All the signs were there before, that I needed to make the change, but I just didn’t – because of the steadiness of the pay check and the fear of being an entrepreneur.

It was money. I’m a single mum, so I had to think: how am I going to take care of my son, all of the other things that our lifestyle has afforded us with the positions I’ve had in the past?

And then the fear of actually doing this, and things like: how am I going to get a client? How do I market myself? What do I do?

So all of these fears and overwhelming doubts and limited beliefs showed up. Any time I was ready to say: I’m ready! All of those doubts and fears and worries showed up and became big stumbling blocks. It was almost impossible for me to decide on my own that I was done.

I guess the beauty of being a coach is that we have to tell ourselves to suck it up and do it anyway! We tell our clients so we have to take a bit of our own medicine. And I’ve been aware – this is the first step, with awareness comes change.

You know that some of these fears are valid, so let’s talk about the worst-case scenario.

So it’s mostly self-coaching (although I’ve also worked with a coach in the past to get to where I am now), and really pushing myself to put myself out there and figure it out.

What I found is: yes, the money is different. Can it work, can it happen? Yes it can! And I’ve proven that it can. Within the first few months, I was incredibly profitable, which is rare – I guess that’s the beauty of running a virtual business, that it’s easy to become profitable with clients. People showed up when I was ready to take it on.

Now, I’m at that point where people have showed up, I’ve got clients… now what? I have to keep building on the momentum, and this is really the hard part in figuring that out. So that’s a daily conversation with myself, not letting myself get caught up in the fear associated with that.

Being able to spend time with my son. He’s in ‘big kid’ school now (he’s five years old) – so being able to go to the school, being able to volunteer, being able to pick him up at a normal time, not at six o’clock or six-thirty. It’s really increased my flexibility around that and being able to really be there for him.

And then I get to drive my own schedule. Now, there are pros and cons to that but I have the flexibility to plan my day however I need to do get things done, so that’s been the greatest benefit for me.

When you work from home, there’s always something that needs to be done – there’s laundry, there’s cleaning, there’s TV, there are so many other distractions that if you’re not disciplined enough to really set your schedule and stick to it, it can be really difficult. So one of the things that I’d suggest before anybody takes this big leap is to really get clear on your priorities and figure out how you’re going to plan out your day so that the distractions of life and that flexibility don’t creep in and take over your day and then you’re not working on your business.

One of the things is: not all fear is real. Stop in the moment when fear shows up – and it will, and it does, every day; fears don’t go away – and really think about: what evidence do I have that this is true? And, if it is real, then what is the worst-case scenario? And if you can accept the worst-case scenario then go forth, just continue moving forward. But most of the time you’ll find that the fear that is showing up is not a real fear, it’s just something you need to learn to push through.

Usually the anticipation of doing is far worse than the actual doing. For me, that fear was: what if people tell me “no”? That amounted to the fear of rejection, and I had to realise: so what? The more “nos” you get, the closer you are to a “yes” from a statistical perspective. You have to learn that the people you’re going to be attracted to, and that are going to be attracted to you, are there – you just have to find them. Everybody you approach is not necessarily for you, whatever it is – if it’s a product, if it’s a service – so that “no” can be saving you from that person that really wasn’t intended to work with or utilise your product in that way in the first place.