This month’s Fearless Fridays interview is with another fabulous yogi, Emily Moll. I know Emily from my time in Geneva and I’ve followed her journey on Facebook with interest. This interview was a fantastic opportunity to hear more about the changes that she’s made. You can really sense her positive energy virtually through the screen and she’s obviously seeing a lot of success with her new business.

Emily’s story shows how important it is to listen to the signs your body is giving you and to do something about it. Although I’d argue that it’s never too late (until you’re dead!), wouldn’t you rather make those changes sooner rather than later and start taking care of your emotional and physical wellbeing now, so that you have time to reap the benefits?

Another interesting element of Emily’s path is that it has all happened very organically. She made choices based on how she was feeling and what she enjoyed, and in this way she gravitated towards what quickly became a successful business. We can do all sorts of analysis and exercises and thinking, but sometimes we just need to follow our gut, try new things and explore what we enjoy, and then trust that we’ll land on something that we can make a living out of.

I’m also feeling inspired by Emily’s “f**k it” attitude and her association with the Hindu goddess Kali. Fierce and feminine, creative and destructive, a terrible warrior and a kind protector – a powerful representation of the tensions and complexities so many of us struggle with in trying to find a balance in our personal and professional lives!

Watch the full video interview to get all the details!

Leaving a corporate job behind to follow your passion: From HR to ‘bad-ass’ yoga! 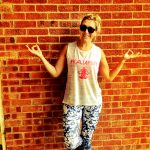 Emily Moll left a career in human resources after ten years of working in the UK, Switzerland and France when her body literally said: enough is enough. Following a lot of travel where she rediscovered, among other things, her love for yoga, she is now back in Norfolk in the east of England, running her own business as a yoga teacher with her very own clothing line. Most importantly, she’s happy!

It was more a culmination of events. I had walked out of a ten-year relationship, which was obviously heart breaking, and I threw myself into work. I think when you come out of something like that you need to keep busy, so I was going out more, I was training for triathlons, I was working in this corporate job… and it was just all too much. I was working all of the time, I had a very large client group spread over Europe and the US and I absolutely loved it – but I ended up having a bit of a burnout. I remember one evening, I was training for the Geneva Half-marathon, and I got 1k into my run and I couldn’t even put one foot in front of the other. I couldn’t sleep, I was losing weight, I had a couple of meltdowns at work – I was just an emotional wreck.

I went to the doctor and asked her to sort me out so that I could get back to it but she said that I had too much adrenaline in my body. I couldn’t burn it off so I’d find at the end of the day that I’d just be shaking. She said, “You need to stop because otherwise you’re going to do some irreparable damage,” and signed me off from work. So I had a month off, a couple of little holidays, and tried to recharge. It was then that I realised that I wasn’t really happy. I needed to get out of Switzerland, to ‘find myself’ (I know it sounds really cliché!). I just needed to stop everything: stop training, stop working.

I quit my corporate job and ended up doing a ski season. I was head of HR for a chalet firm, I loved being in the mountains – it was one of the best experiences of my life! I remember one evening watching the film The Secret Life of Walter Mitty and I thought, you know what, I’m just going to go travelling again. The day after I booked a six-month trip around Latin America and that was it! So for the last couple of years I’ve done a couple of ski seasons, I climbed to Everest base camp, I travelled to India and trained to be a yoga teacher…

All of this was about trying to find my niche, what I wanted to do. It was while I was in Costa Rica that I re-found yoga, I fell in love all over again with it and with how it makes me feel. I’m a bit of a ‘hothead’ and a perfectionist, I put so much pressure on myself, and I find doing yoga evens that out. I had no intentions of being a yoga teacher, I just thought I’d go to India and learn a bit more about it and see what happens.

After doing a bit more travelling in Sri Lanka, I did a couple of local classes for my mates and they got full up… And then people asked me to do another night… And it ended up exploding, I’m in a couple more towns and it’s what I do now!

I think it’s the same with making any kind of life change, it was my own sense of failure. When you think: I ‘had it all’, I had a relationship, a job, I was happy – at least from the outside looking in. Inside, though, I was just so unfulfilled. So it was about letting all that go and taking a leap into the unknown.

You always worry, “Oh my god, what are people going to think?” But to be honest, I just think, “F**k it! What’s the worst that could happen?” And that’s basically what I base all my important life decisions on. Just go for it! I’d rather live a life without regrets, knowing that I’ve given it a go. If it doesn’t work, you’re going to fix it, or that’s just not your path. We all have those days, “Oh my god, how am I going to get over this or fix this problem?”– and you always do! There’s always a solution. It’s another little road bump, and you just need deal with it!

My parents are really understanding. I think my dad secretly thinks, “What on earth is she doing?” but it’s nice not to have that pressure. Especially when you get to over 30 and you’re female, and people say you should be having babies and all that. I don’t feel ready for that, I don’t know if I’ll ever feel ready for that, and it’s nice to have parents who don’t impose those traditional values on me.

I’ve met so many people on the way. When you’re travelling, you meet so many like-minded people and everyone is so supportive, it’s fantastic. And my friends at home love hearing about my little adventures and they all come to my classes. The local community has been amazing too, welcoming me with open arms, it’s been lovely!

Plus, I’m very independent and I know I can support myself. I know I’ll always be okay! 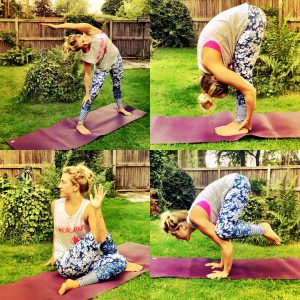 I think yoga is a gift. I have so many of my students coming up to me thanking me; whether it’s for their anxiety or lower back pain, it feels really nice to be helping people. HR can be a little bit of a thankless job! If you think of HR in your company, you only ever really see them when the shit hits the fan, or you have to do something like make redundancies, or you have some kind of performance issue. No matter how well you handle it, you’ve always got that negative connotation; with yoga, it’s completely different.

Now, waking up every day, I no longer have that Monday “oh shit” moment when you have to peel yourself out of bed and attack those emails… I know I’m going to get up, teach yoga to a bunch of people who want to be taught, and I love it! It’s so nice to share something that I love, that’s personally helped me, so I know the power of it.

You need to really seriously think about the consequence of you not making that change: can you sustain that life that you’re living? I always say to everyone, “Life’s too short to be doing something that makes you unhappy!” Go out there, face your fears, whether that’s going to the step aerobics class or doing a bungee jump, it doesn’t matter! You have to try and live the fullest life you can.

Work with what you’ve got – not everyone can swan off and travel, we have responsibilities, but it’s not hard to make a little change to make yourself a little bit happier, so just do it.

If you’re lucky enough to be living in North Norfolk, you can go along to one of Emily’s yoga sessions! Find out more on her website Kali Yoga or on Facebook.