This month’s Fearless Fridays interview is with Angela Tran. We are both part of a business mastermind and I suddenly realised that her story was an inspirational one to share with you all!

Angela took a “detour in the right direction”, as Gabby Bernstein puts it, training for 12 years to be a doctor only to then realise that the work didn’t feel meaningful to her, and wasn’t compatible with having a family.

She recognised the need for mentoring and guidance right from the start, turning first to free resources available online and then investing in a business coach to help her achieve her goals.

Read on or watch the full interview below to discover how Angela has transformed her own life, and now helps patients transform theirs.

Leaving a corporate job behind to follow your passion: From Grey’s Anatomy to weight loss transformation 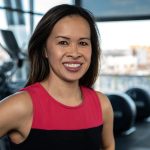 Angela Tran started out as a primary care doctor but quickly realising that it wasn’t what she wanted to do, and it wasn’t compatible with having a family. Today, she is a medical weight loss doctor in Denver, Colorado, helping busy professionals lose over 50 pounds in less than six months without surgery, using one-on-one nutrition, fitness training and medical supervision all under one roof.

I was the classic story, little girl with a dream of becoming a doctor. And by the time I finished 12 plus years of training, I ended up not wanting to be a doctor after all. Isn’t that a terrible feeling to have that? “Did I just waste 12 years of my life to really go back to square one?”

I had finished all the way through. I became a primary care doctor, so I was writing prescriptions, helping people with knee pain, coughs and so on, and then I started seeing diabetes and heart attacks. But at the end of the day, all I felt like I was doing was putting Band-Aids, and I wasn’t really saving lives.

I tell people doctors aren’t like they are on the hit TV show Grey’s Anatomy here in the US.

So it really made me re-evaluate. I came to a point where, gosh, if I were to start a family in the terrible state of mind that I was, I was going to be a terrible mother, terrible wife, terrible all around. So that’s when I really started my own personal journey.

I hope this resonates with all the listeners out there. I was caught in the middle of the highway, and it was high traffic, and literally it was eight o’clock at night… I was clocking in for months of 12-hour plus days; I could feel my blood pressure go up. And I literally had a moment where I said, “Gosh, if I had a child waiting for me at home…” I really felt that I would be the worst mother of all. So that was really sort of my ‘aha moment’, where, “There has to be more. I can’t live life like this.”

So I panicked. Just like anybody else, I wanted an out, so I was on the internet. You’re obsessed with looking for the next best thing and the next job, and then you realise, well, this office is further away, or this office makes you be on call on the weekends. I literally just said, “Okay, universe, you win. You know, give me a sign.”

And believe it or not, I met a doctor who actually helps doctors like me who are classically burnt out. And I went to his workshop, and that was the start of it all. He said, “You know, Angela, you remind me of one of my friends in Texas who does weight loss. I’d like to introduce you.”

And so we spent an hour on the phone. She said, “I truly am actually helping people.” And I said, “Really?” And she said, “I enjoy what I’m doing.” And I said, “Who says that? Who?” I didn’t even think that existed, that people actually really enjoyed their job. I thought it was just a means to live life. And so it was love at first sight. As soon as I got off, that was my journey. I started to try to figure out, with zero business background, how to build my practise.

Fast forward seven years later: I started from two employees to ten, that I love to death and drive me crazy. But I’d never give it up to go back to the corporate job that we all feel the pain in.

I gave up a six-figure salary paycheck. It made me want to vomit, not only to quit all the work… I was a straight A student! I gave up partying and I studied, and I really worked hard to get into medical school. And then all of a sudden, to even give it up financially; I know some people out there are the primary breadwinners. I wasn’t even married at the time. Yes, I was dating my now husband, but it was just all on me, and I didn’t ask him for any help. I said, “If I’m going to make this work, it’s all up to me.”

That was the biggest challenge of all, committing and going ‘all in’. You don’t have a plan B. You know, as an entrepreneur, there’s no such thing as a plan B. You make it work, and that’s why you’re successful, because you don’t think that there is ever going to be a plan B. That’s probably been one of the secrets.

And then the second obstacle was, “I have no idea how to run a business.” I know how to look under a microscope, and I know how to prescribe an antibiotic, but I don’t know anything about profit-and-loss statements and hiring employees and pricing products and services.

The nice thing is that the internet is your library of resources; everything and anything that you ever need is right there.

Here in Denver, Colorado, they also have a centre called the Denver Small Business Development Center. So you take a business basics class, and then they assign you a free mentor that you can meet with. So for an entire year, I literally was in her office every other month. I was seeing patients, running back to the corner office, making phone calls. And fast forward to about 2012, when I officially opened doors, right after I put in the resignation to my chief.

Yes, I had the support of my mother and my now husband, but they’ve never run a business, and so thankfully, they just said, “You can do it.” But really, I had to find resources again, what was accessible to me, like the mentor at the Denver Small Business Development Center, and just took a few courses online, a few business conferences. I just had to open myself up to the world, because you get caught in your corporate job; you have a very narrow-minded one point of view.

And then once you release what I call the golden handcuffs so to speak, the universe is at your feet. So I let the universe support me, and I was more open to it. Rather than my narrow-minded, “I want to control things,” “I want this to happen,” I just sort of released whatever I thought was right, and allowed the blueprint that I believe already existed, and kind of took the Indiana Jones leap of faith. You don’t see it at all. You literally feel like you’re going to fall – that’s exactly how it feels. But all you have to do is take a step.

Oh my goodness, I’m just on an all-time high. Yes, I do have the stresses of running a business. Youmentioned we are in a Mastermind group called Legacy Leaders, and our business coach is Kelly Roach. I owe everything to her, because back in 2015, I still struggled. I still didn’t really know what I was doing. I kind of almost recreated my corporate job. So I was still the one-woman show where I was seeing patients back to back to back. And I was doing the marketing and the bookkeeping and even answering the phone calls. I remember I had one employee and she was feeling ill, and so I was it, the only one in the office.

And so I finally came across Kelly Roach, who really helped me understand how to build a true business and build a team.

Fast forward to today: rather than seeing 25 patients a day, I see roughly about five patients a week. But I’ve been able to build an actual team that can really facilitate the programme and formula that I’ve created. Now I still see all patients, but it’s just in such a different atmosphere.

I did it all for my daughter Hailey. I get to drop her off at school next door to my office. I take her home during my lunch break. If she has a soccer game, I get to take her. If she’s sick, I get to go home and take care of her. If I want Fridays off… I don’t remember the last time I worked a Friday. That’s the beauty of really stepping out of what you thought was security, and opening yourself up to what you were truly meant to do, and the universe just rewards you over and over again.

And I heard this from another mentor: “The universe is your business partner.” And I truly believe that.

Commit to yourself first. I know that some people kind of hear that, and it logically makes sense, but they never actually implement that all the way through, because of fear or whatever barrier stories. You can say it logically, but you have to actually feel it, commit to yourself first, and then things will work out the way they’re supposed to. You actually have to make a decision, meaning that you eliminate all other alternatives by committing.

I know there are a lot of people out there who are scared, and I was there, and guess what? I’m still there. We as business owners just have a different tolerance of fear, and we’re able to make decisions around it. But I’ve been there, and I just want to encourage people; there is so much on the other side that you are giving up by staying where you are. So commit, figure it out, and it will be fast to get you to where you want to be. Life is too short for you to stay where you are.

Find out more about Angela at denverweightlossclinic.comor find her on Facebook.