This month’s Fearless Fridays interview is with Anita Perkins. Having recognised that she was reaching the point of burnout, she made the ‘brave’ decision (although she doesn’t relate to that word herself) to quit her government job and explore what else might be out there. She took a year off to travel, including a trip to Everest base camp, and ended up setting up her own consultancy, through which she does a wide variety of different projects.

Watch the full interview below or read on to find out more about the moment when she decided that she needed to make a change, how she worked with both a life coach and a business coach to get the support that she needed, and what she’s enjoying most about her new life as an independent consultant.

Leaving a corporate job behind to follow your passion: From government and academia to consulting 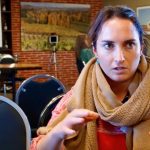 Anita Perkins comes from a background in academia, having completed a PhD in German literature. After she took up a role in government in Wellington, she spent the next six or seven years working in international relations as well as in environment and the arts. Last year, she started asking some important questions about what she was doing with her life, taking a year out to travel, hike to the Everest base camp, and talk to a lot of different people. As a result, she came up with the idea of becoming self-employed – and started Anita Perkins Consulting.

I had a few different jobs in government, and the last permanent job that I was doing I really enjoyed, and I was quite passionate about the work – but I was doing the job of maybe four people. You just notice little things, like when people ask you, “How’s it going?” and you say, “Oh, quite busy and stressed,” and get a bit sick of the sound of your own story, and you’re just not sleeping as well… things like that. I think that’s where you get to the point of saying, “Oh, I need to make a change.”

There was actually one particular night where I just didn’t sleep and, in the morning, I rang my parents and said, “Something has to change this time. This is the definitive moment where I have to make a choice to step away from this.”

I guess I’ve always had various role models. Both of my parents were self-employed at different times – my dad was a musician, and my mum was a counselor, before they retired. And I think having done my PhD, I also got used to motivating myself to show up every day and do the work. I’ve always toyed with the idea, then looked into several things, and also worked with a life coach, and I felt, “I might as well give this a go – and I have the friends, family, and financial context that allows me to do that.” It’s easy to get wound up about it and worried sometimes but, at the end of the day, the worst that could happen is that I would go back to a normal job.

I think walking away from something, you feel a real sense of responsibility to the work area and the people that you’re working with. It feels hard to walk away from that and from what you know, and the security that comes with that.

In terms of becoming self-employed, a lot of it has been about simple things – even the question, “What do you do for your job?” can be difficult, trying to narrow it down…

Some of the challenges are also around being proud of myself and communicating what I’m good at, but in a really authentic way; especially in a cultural context in New Zealand, which you might also find in the UK, where people don’t really go around blowing their own trumpets. So, how can you really convey that stuff that you’re good at? How you can help people but still do it in a really genuine way so that you’re building relationships and hopefully adding value to what other people are after?

When I first got a life coach, it was actually a suggestion from my mum! At the time, I had just moved from one job back to my old workplace and I started to doubt myself and my decisions, asking myself, “How did I end up in this situation?” I think I just needed someone to help me start building up that self-trust again, that confidence in my decision making and in the direction that I was heading.

That was when I started to make a few changes, introducing a light routine – when I get up in the morning, I do a bit of meditation, and at the end of the day, I’ll write a gratitude diary with three things that I’m grateful for, one thing where I’m proud of myself for that day, and one thing that I learned.

I’ve also worked with a business coach, which has been amazing – right from the practical things of “How do you write a proposal?” and “How much money do you charge?” through to “How do you identify your values?” and “What text do you put on your website?” That has really been invaluable.

One thing I think that’s interesting is that a lot of people are saying, “Oh, you’re very brave to make this move, to try out this path!” – but it doesn’t feel like that. “Brave” doesn’t seem like the right word. To me, I had a situation where I wasn’t living my best life or being my happiest self, and so I needed change that situation. It was almost a logical, rational decision in a way – but also a very emotional and personal one, because you don’t want to let people down or get a bad reputation.

I understand that I’m very privileged: the reality is that I don’t have to pay a mortgage, I don’t have children and some of those pressures that other people have; and I have a very supportive family and friends – so that makes it a very safe context for me. But I still think it can be about giving it a go and trying this out – and I think that’s where things are heading in the world anyway; it’s a good time to be trying these things.

There’s a lot of variety: I’ve cast the net wide and I’ve had a really big range of roles. I’ve been working halftime pretty much on government contracts and then spending the rest of my time building up the website and getting new work.

So far, my work has ranged from writing creative content for a restaurant to doing research for a woman I met on holiday in the Cook Islands last year, working on a land handover with aboriginal people; more recently, I’ve written some web content for Global Women about the gender pay gap. I’ve met some amazing people; one thing leads to another… and it’s really exciting! Biking around town to meet someone new for a bit of a chat about a potential work project, I’ve just got that feeling of, “Where’s this adventure going to take me?”

While I’m very lucky to be supported in a lot of ways, this is something that I’ve enabled for myself – and that’s a nice feeling. I might be writing an article and sending it away, or there was that moment of getting the website up and running, and then feeling, “Yeah, that’s great!”

There’s also so much learning going on.

I guess just really listen to that ‘thing’ you’re feeling. Life is too short, and there’s so much other stuff that you can do rather than keep going along that road. Even if a lot of people expect you to keep going, and it’s a well-trodden path, it’s not always the right thing for you, and you’re the one who has to live this life, every day.

I would also say, really open the door – get out there and ask other people who are doing what you might like to do, how they got there, and what lessons they learned. Listen to podcasts, read your book!

A lot of people want to have something very exact in terms of what they’re going to do next when they leave something, but as long as the practical side is there – you can still pay your rent and so on – then it really is worth the adventure of stepping out and taking that leap, and exploring what could work for you.

You can find out about Anita’s consulting on her website, connect with her on LinkedIn, or follower her on Facebook.