I met Sarah Helena Barmer on a two-week writing course on the island of Skyros in Greece. For me, this may just have been the best holiday I ever went on; it was definitely what I needed at the time. It was an environment in which everyone was completely open and accepting, and I felt fully at ease just being myself. The writing course itself was very laidback, with the teacher Allegra Taylor favouring an approach of writing freely, withholding criticism of ourselves and of others. On the last evening, Sarah Helena played the guitar as we all sang Leaving on a Jet Plane – it doesn’t get much more clichéd than that, and yet it was so right for the occasion. I love that song; it was also the song that we serenaded campers with when I was a counsellor at Coppercreek Camp many years ago…

I’ve kept in touch with Sarah Helena, a fellow Swede, mainly via the magical power of Facebook. I’m always in awe of the positivity she displays in her posts, the love for her family, for her adorable son, and her general attitude to life. As you’ll read in her personal story below, she is the kind of person who trusts her gut instinct, follows her heart, and goes by feeling rather than reason. Most of my life I’ve been at the other end of the spectrum, always being logical, rational, going for the “sensible” option. Last time we met up in Stockholm, we were supposed to have a quick lunch so that she could get back to packing for her move down to Helsingborg in the south; we chatted for four hours, and I came away feeling optimistic and inspired. As I’ve tentatively moved more in the direction of feeling, I’ve found that a whole world has opened up to me. I’m sure some of you will find this incredibly hippie and esoteric, and that’s your choice; but for those of you who are open to trying something new, I urge you to listen to Sarah Helena’s advice: dare to listen to your inner voice, dare to trust yourself, and take control of your own life.

Leaving a corporate job behind to follow your passion: From front office manager to poet, linguist, nomad… 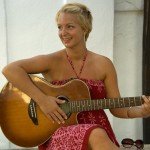 After many years of travelling and living abroad, Sarah Helena had settled down in Stockholm. She began working within general aviation, had a baby, and had the opportunity to become a manager of her team. Everything seemed perfect, at least on the outside. But she felt that she was on a path that she hadn’t chosen, a path that she would never be one with. So she “jumped off the cliff”, with no map, no plan, no thoughts about what would, or could, happen. She started studying French, something she had wanted to do for years. She also took up university courses on indigenous studies and literature. Somehow this awakened something inside her, and she began writing new songs as well as poetry. Today, she has come to the realisation that she will always be a bit of a nomad, on her way out into life with just a backpack on her shoulders…

When I moved to Sweden after a period of living in Greece, my goal was to work at an airport, as I had done it before and really liked it. I began working as a handling agent, coordinating the flights arriving to and departing from Stockholm. While on maternity leave, my company gave me the fantastic opportunity to become a Front Office Manager, which meant coordinating VIP flights. Would I? Could I? I decided to take this challenge and make the best of it. I really loved it in the beginning, and even though it was tough in many ways I was happy for the life experience.

After some time, though, I began feeling that I was heading in the wrong direction. I longed to do something more creative, to learn more languages, to travel more and maybe live abroad again. One night, I woke up feeling anxious and stressed. I decided that it was not right for me to work as a manager, and the next morning I quit my job. It was a gut feeling, a voice inside me, and I had to follow that voice. When my body, my mind and my heart said NO, I knew it was time for a change. I also longed for a more creative means of expression; as a singer/songwriter, I had no time left to jam or write new songs. I had put a lot of effort into my music and writing before starting working in Stockholm, and now I longed to get back to this.

People around me who told me NOT to quit my job and NOT to listen to that voice: “Better be safe until you find something else. Better wait.” I just felt I couldn’t wait. Luckily I have great support from my family, and the advice that my father once gave me echoed through my head: “Life is too short to do something that makes you feel bad.”

My partner, the father of my son, supported me all the way, and together we made a new plan to make it work. We had to make adjustments to our economy, but just by being more conscious about our spending we realised how much we spent just because we were lazy! Like eating out, or going by taxi instead of walking…

I also felt supported by my family. I’ve always been encouraged to listen to my gut feeling, trusting myself, and my own instincts. I am very grateful for that now, as it has helped me to choose a better path in life both for myself and for my own family.

I have never really planned anything in my life. I have had goals and dreams, and have always tried to make them real; but I have always followed my instincts. Every time I have ignored my instincts or gut feeling, I have ended up in a place where everything seemed wrong. I guess the hardest thing has been not listening to what everyone else thinks about the path I am creating for myself; but I know it’s me who has to walk that way, and no one else. The best thing about my lifestyle today is not feeling stressed about work and being able to channel that energy to my family instead. Still, I am very grateful that I had the opportunity to work as a manager because I learned so much from it.

I still don’t have a plan… I do have certain goals, one of them being studying and finishing a bachelor’s degree; this is one of my dreams. I’m not sure yet what I would like to focus on, so I’ll begin with subjects that I feel passionate about like languages, creative writing, and anthropology. For the rest of this year, I’ll continue to write music, work on my poetry project, and study Spanish, and I’m travelling to Peru in November. I need to work with several different projects to feel free and at my best: a little bit of singing, a little bit of poetry writing, travelling, and studying something academic. I don’t need a job title, a label for who I am, to be someone. By going beyond this, I feel free.

Just do it! Life is too short not to.

Dare to listen to your inner voice, dare to trust yourself, and take control of your own life; be a driver, not a passenger. The best thing is that it’s never too late to make a change, you can start today and either find a new way or else make one yourself. If you can dream it, you can certainly do it!