You’ll remember my interview with Kahi, surfer dude and beach clean-up manager extraordinaire. Well, while I was staying with Kahi and his wife Louise in their house near Waikiki, I also met Ryley. A Kiwi who was visiting from PNG – not Procter and Gamble but Papua New Guinea, which caused a lot of confusion for me – he turned out to have another fantastic career transition story. Previously working in customer services, Ryley is also now working with Sustainable Coastlines, the NGO that Kahi manages in Hawaii, currently setting up a branch in Micronesia.

In Ryley’s case, he decided to make the move largely because of a disconnect between his own personal values and those of the company (one of my 7 signs that you should quit your job!). He makes a number of interesting observations on the transition that he’s gone through, including an important point about what happens when you really care about your work. Compared to an uninspiring job where you’re disengaged and can shut down both your computer and your mind when you leave the office, working on your passion – whether in the non-profit sector, on your own business, or in a different context altogether – can make it hard to switch off. I’ve certainly found that I can work for much longer hours now than I ever did in my so-called stressful office job. As Ryley observes, it’s important then to make sure that you’re working effectively on the things that will really make a difference – and, I would add, that you take a break now and then so that you don’t neglect your health, your family, or other priorities in your life.

Read on to find out more about Ryley’s transition!

Leaving a corporate job behind to follow your passion: From customer services to cleaning up our beaches 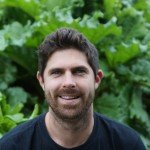 Ryley Webster studied tourism at university. He had always been very interested in the impact that tourism had on indigenous cultures, so he left university with grand ideas on how to help local communities develop tourism infrastructure in a community-based way. He took the first job that he could get back in Auckland, working for a worldwide coach touring company in a customer services role. Over time, however, he began to feel a difference between his own values and the values of the company. He went travelling for a year and a half and during that time he had the opportunity to volunteer in a new NGO that his friends were setting up in New Zealand. Today, he’s in Melanesia, as Founder and CEO of Sustainable Coastlines Papua New Guinea.

There were definitely a few defining moments in my customer services role for me that were not really in line with how I felt people should be treated, more than anything else.

One that particularly stands out was managing a girl who was having a lot of anxiety issues – a few things happening at home, and a bit of it was work related as well. Her main role was to answer calls from clients and from travel agents but due to her anxiety issues, she couldn’t bring herself to answer any phone calls.

I’m a believer in helping people overcome such things. My manager, however, took the stance that since she wasn’t able to perform her primary responsibilities, and therefore wasn’t doing her job, she should be replaced. It was just another person at the other end of the phone. I did my best to try to mould a position for her to get her back on track, over the course of a couple of months. She was making good progress based on what she was going through but she wasn’t cutting it from a company perspective, so I had to let her go. She was such a valuable part of the team; how she related internally to staff wasn’t taken into account.

That was a bit of a defining moment for me, having to let her go; that stuck with me for a while.

I think the challenge for me was the change in mindset in how you work. There’s always something to do at Sustainable Coastlines, while I had been used to a culture of switching off at the end of the day. After a year or so of working for Sustainable Coastlines, working all the time and never switching off, I came to the realisation that, yes, you can do a lot, but you should be putting more time into doing what you are doing better, as opposed to picking up a whole lot of new projects.

I think the fact that we were all mates was a really big factor; we all supported each other.

Sustainable Coastlines is all about positive action in a coastal area. Working in a marine environment, the boys are all surfers (me not so much) and we used to go out surfing, hanging out at the beach together, spear fishing, diving… So we connected on a level where the ocean and care for that coastal environment was what brought us together.

And then working together as friends, you already don’t have the same relationship as when you’re just thrown together in a social experiment within a workplace. We would still tell each other where to go every now and again but that would be forgotten the following day. We knew each other’s abilities, we knew each other’s strengths; but more than that we knew how to relate to each other. So if someone else was in a certain mood we knew how to deal with that. We knew when someone was on a roll how to keep feeding them what they needed to keep going; we knew when someone needed to take a break. It was like being on tour for years! You get to know each other really well, and know when people need a break and when people need to help each other out.

My family has also always been incredibly supportive of me. I’m very lucky, my parents have never put any pressure on me to be anything or do anything other than what I wanted to do. I realise that I’ve always taken that for granted, talking to other friends whose parents have had a path mapped out for them. I’ve never had that pressure, so I’m pretty thankful for my family in that sense in supporting me in whatever I want to do.

I just think that it’s fun! And the people that we meet along the way…

We do a lot of events that are focused on positive action. We’re looking at plastic pollution, the impact that that has on the marine environment, human health. I find I don’t get particularly disheartened by looking at images of rubbish in places mainly because when we look at running education projects, I take the little wins from it. I think it’s very much focused on people and their reaction to understanding the connection that they have. Most people particularly in the Pacific where we do a lot of work already have that existing connection with the ocean. And having them understand that there is something they can do about looking after that place every single day just by putting rubbish in the bin, by not throwing it away – it’s those moments. It may seem like common knowledge and pretty logical, but it’s a moment where people just click and think, “I’m not doing this because I’m being told to do it, I’m doing it because it just makes sense. I want to look after the resource of fish that my parents have been eating, my grandparents have been eating, for x amount of years.”

So just seeing those moments, seeing those small wins where people really understand the issue and want to do something about it – rather than feel like society is telling them they should be doing something about it or there is an overarching authority that is going to tell them off for doing the wrong thing – I think that’s one of the biggest motivators for me. When you feel like you’ve got through to someone and you’ve been able to provide them with tangible solutions with things to do, that’s probably one of the more pleasing things.

A lot of people get very nervous around the word “networking” and how you connect with people who may be able to provide you with a career opportunity. For me, networking is just being around people who think like you and have the same interests as you. So my advice: the hobbies that you have, the things that you enjoy doing… it may not pay to start with but spend some time with people who enjoy doing that same thing as you. That could be volunteering for a little bit; it could just be hanging out at your sports club; it could be coaching a team if you’re interested in leadership and maybe children as well.

It sounds simple enough: do more of what you really love. But really, just take time to be around people who think like you; because you are not alone.

You don’t need to have it all figured out; you figure it out along the way. And more often than not with the support and the collective ideas that other people bring to the table as well.

You can read more about Sustainable Coastlines and their work on their website.