This month’s Fearless Fridays interview is with Jana Schuberth, who I met back in May at the Alive in Berlin conference. Jana is the one who created the whole Alive event and community, after finding that most of the events of this kind are limited to North America and deciding to “be the leader she was looking for” in bringing that same spirit to Europe. I spoke with Jana back in July, when she was in her usual “coffice” in Starbucks, Los Angeles, about to move on to Portland, Oregon for the World Domination Summit organised by Chris Guillebeau and part of that inspiration for the Alive conference.

This is an incredibly honest and inspiring look at the choices she has made, the challenges she has faced and how she continues to address them, and there are a number of really powerful themes that I think a lot of us can relate to. Jana had to come to terms with leaving behind the prestige of being a chartered accountant at a prominent firm and creating a new identity for herself. She has had to address an underlying belief structure that earning money only comes from doing a certain type of job and you can’t make a lot of money doing something you love. And she makes a great point about not sitting around waiting for your Passion to come knocking at your door.

In my endeavour to do more video on my site, I’ve recorded the full interview for you to watch here. Being the amateur that I am, at the time I was using a demo version of the Skype call recorder so poor Jana has a big ad banner right across her forehead. Sorry Jana! I still think it’s worth putting up the video because Jana shares so much more than it’s possible to convey in my abridged transcript below. So please enjoy the video if you can, or read on below to learn more about Jana’s experience…

Leaving a corporate job behind to follow your passion: From communications manager and accountant to life coach, consultant, and leader of a community 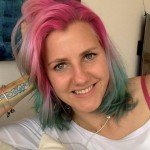 Jana Schuberth has made a number of career moves and life changes over the past 12 years. Originally planning on becoming a children’s nurse, she ended up training to become a PR journalist, and from there moved on to become a marketing manager in the leisure industry and got a degree in advertising and marketing communications at De Montfort University in Leicester, UK. When a mentor suggested that she train as an accountant, Jana jumped on the idea as a way of addressing her weaknesses in the area of finance and “numerical stuff”. She trained at Pricewaterhouse Coopers but was asked to leave after failing the final exam twice; she finished her training, however, with a smaller company and eventually moved on to Experian. Since then, she’s completely transformed her life and her lifestyle, both for herself and increasingly for a community of lifestyle and social entrepreneurs…

At Experian, which was really my last real job, I had the pleasure of working with a manager who I could be really open with. I sat down with her and asked her, “What would you have done if you hadn’t become an accountant?” and she replied, “Oh, I’d have a garden centre!” So we got to talking about alternative careers…

By that time, I’d hired a life coach for myself. I was just at a loss, I didn’t know what my next step should be; I didn’t really know what a life coach was but I had nothing to lose. I had always had a plan of what I wanted to do next and there I was with my finance background, my marketing, and my languages, and had no clue what my next step should be. Within that, I really started to fall in love with personal development and I started reading a lot of psychology books. I had actually considered doing an MA in Psychology after my degree – when I look back, the common thread is there, for me to have loved behavioural studies at university, always loving psychology, always reading psychology magazines… So it was easy in hindsight but at the time I was very frustrated with not knowing what I wanted.

As we talked about personal development stuff, my coach asked, “Well, how about coaching for a career?” Up until then, I had felt that I needed a safe job, my boyfriend at the time had his own business so I didn’t want to have another variable income, and I wanted the pension scheme and all of that… But I was living from weekend to weekend and every Sunday afternoon I’d be getting the blues and saying, “Do I really have to go?” until one day my boyfriend said, “You don’t. If you don’t want to go, then don’t.” That really sparked off my journey into self-employment – and I haven’t looked back since!

I think professionally the biggest challenge for me has been the last two years with Alive.

The idea for Alive had been born four years ago on a retreat with a mentor coach, because I wanted to have a community – I felt a little isolated in my industry in England in the middle of nowhere. I was always looking to the US for speakers, for TED talk inspiration, for blogs and books and authors, and I didn’t feel that we had the same amount or the same calibre of people in Europe. So Alive would become the stage for those people.

This journey for me has been associated with a lot of fears. I had to have a lot of coaching from other professionals to overcome my fears – there is so much work involved and last year I was coaching 55 clients at the same time! I’ve reduced that to less than half this year but the financial burden is very high; I’ve invested over $60,000 into making those last two years happen, personally.

Right now, we’re expanding across different revenue streams and I have to organise funding and run it like a business. We have 20 people on my team now, all volunteers – in the first year there were three! So becoming that leader is very challenging for me, to delegate work, to be effective as a leader, to be inspirational to them, to put the right structures in place… But the legal and financial responsibility that comes with running big conferences and these businesses for real is probably the biggest challenge, and I’m still learning, every day.

In the past six years, I’ve always had a coach of sorts, or several coaches, to help me through recurring patterns.

For example, one of the patterns that has been very evident is that either I work really hard in stuff that I don’t like and I make a shitload of money i.e. accounting or consulting; or I do what I really care about, what I love, and I’m broke! So now I’m working with a coach on how I can do the work that I really love, that is ‘play’ for me – and make a shitload of money at the same time. It is very viable, it’s very possible, but because I grew up with the belief structure that work has to be hard, and making money is difficult, and money doesn’t grow on trees and all those things… that’s what I need to address. So I have people that I work with there.

Other than that, I probably feel the most support from the people I really care about: my family, my sister, my friends that have my back; the people that come to speak at Alive, that are investing their own time, not being paid, coming to Europe; and the Alive community. Whenever I feel like, “I don’t know why I’m doing this anymore!” I just watch the video from last year online and I go, “Yep, that’s why I’m doing it.” Because it’s meaningful to me.

Instantly what comes to mind is skydiving! What other people pay in rent and cars and gas and all of that stuff, I pay in flights and skydiving.

I love just having a suitcase and a backpack. And although some days I want to have my own little home of sorts where I can put my head to rest, I’ve also learned to be very, very comfortable with very unusual, or uncertain, circumstances and with very limited means. I feel a deep sense of freedom to literally just pack up and go any day. So it’s a very strong lifestyle by choice: I choose to be here right now, and then I choose to be somewhere else in two days. And then… I want to do something else! It’s very, very freeing.

And I get to meet a lot of amazing people and visit great places. I’ve fallen very much in love with Hawaii! I get to spend great times in really beautiful places – what’s better than that?!

People think that passion is just going to show up on their doorstep one day and then they’ll use that passion to make big money. I don’t agree with that, I think passion is something that develops over time. You can have curiosity and you can have an inkling of what you like in the present moment and the more you follow that every day, the more it will lead to passion… but I think it’s wrong to wait for the perfect thing that feels like, “That’s it.” Sometimes we just have to follow hunches.

And the second part of that piece of advice is just to be really in tune, and almost become a scientist of your own life, of all the things you don’t want to miss out on – like the documentaries that you keep watching, the blogs that you keep reading – because they are a thread of information, of what it is you really want and care about. And sometimes it’s better even to ask: what bothers you? Because if you can solve a problem that several people have, chances are that’s going to get you some income.

The main piece is really to follow your curiosity!

Jana is currently gearing up for Alive 2016 in Hawaii in January, followed by Helsinki in September, as well as looking at expanding into different sources of revenue for a sustainable business. She’s also learning to day trade foreign exchange currencies, continuing to evolve her relationship with money, as well as working on a second core theme,  intimacy and relationships. Find out more on her website.