It’s time for another Fearless Fridays interview, and this one is with Michael Cinquino. It’s been some months since I spoke to him and I loved going through his interview again now as I prepared it for publication. I felt that Michael and I agreed on a lot of points, and his experience, although very different from mine, has led him to draw some of the same conclusions.

One particularly interesting insight that Michael shares is the importance of asking not just “what do I love doing?” – e.g. acting – but “what is it about this that I love doing?” – e.g. I love inspiring people. The power that is in this modified question is that it helps you to distil why you love a particular activity and then allows you to broaden your perspective on how you might bring that to life. The acting one is a good example: you might think you love acting but what you really enjoy is standing up in front of people and getting them to feel something – in which case you might consider, for example, being a professional speaker. Getting specific on what it is that actually makes you come alive and fills you with purpose will be a huge help in working out what career to pursue.

Another insight that you’ll hear Michael talk about if you watch the full video is the idea that 99% of all our problems can be solved simply by getting out of our own way! So much of our success and happiness comes down to our mindset, and overcoming our own fears and limiting beliefs will go a huge way towards allowing us to be all that we can be.

Read on to get Michael’s answers, or watch the full interview to get the full story.

Leaving a corporate job behind to follow your passion: From acting to photography (and a lot of things in between!) 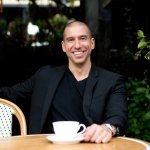 Michael Cinquino has had about four or five different careers, encompassing four years in the navy, studying psychology, working as an actor, becoming a photographer and running his own business. Today, he’s a photographer, speaker and on-camera coach, based in New York City.

After four years as a rescue swimmer in the Navy, I wanted to study psychology and understand human behaviour so I went to Penn State University and began doing that. I then realised I didn’t really want to study behaviour in the way that you study behaviour in school, there was statistics and numbers and studies – and I just wanted to know why people do what they do. I met somebody who convinced me to audition for a play – this was a complete 180 – and I got cast in the show. Opening night, I did something on stage and the audience loved it, and everyone laughed, and at that moment it was like cocaine being injected into my heart! I felt the power, and the joy, of being able to move people. So I changed majors and got an undergraduate degree in acting and directing and a graduate degree in acting. I came to New York City a week after graduate school, tried to be an actor for about four years – it did not go well, and I learned a very hard lesson about doing what you love, because what you love might not love you back! I learned that you need to do what loves you back…. And a camera found its way into my lap accidentally – I had no aspiration to be a photographer, no real interest in photography – and that’s when I like to say my life began!

I picked up a camera and I found fulfilment for the first time in my life. The more I did this thing, the more I wanted to do it; and it also gave back to me, it loved me back. So I’ve been a professional photographer for about nine years here in New York, and now I’ve moved into the online business space and also do speaking. The reason why I did that was that I learned as a photographer that what I was really doing was inspiring the best in this other person, and then invited that best self to come out and play. And I thought to myself: I want to do this for more people than just in front of my camera. So that’s why I launched michaelcinquino.tv!

The question I learned to ask was not, “What do I love doing?” but “What do I love about doing whatever this thing is.” And what I loved about acting was inspiring people – and I thought to myself, I don’t need to be an actor to inspire people, there are many vehicles to do that. So when I discovered that what I loved about it was inspiring people that set me on a whole new path and made me realise that the vehicle can always change, but what I’m doing is going to be the same, for the most part.

I’ll be very honest, I’ve suffered from anxiety and depression for most of my life, mostly anxiety. So I’d say the bigger challenge for me was learning to manage that. And I’ve done it in very unhealthy ways, in ways that I didn’t even realise, I was self-medicating… and now I’ve grown to manage it in very healthy ways and it’s something that for the most part I’ve almost completely left behind. It was a long struggle for me, an underlying challenge for me for most of my life.

The first thing I did was get professional help. I joke that my longest relationship in NYC is my therapist! I met her nine years ago and when I came to her I was an absolute mess and was seeing her twice a week.

The second thing I did was learn to engage in healthy and empowering ways to manage anxiety. I stopped drinking a year and a month ago and that was the last thing I needed to do to really let go of the crutch of dealing with anxiety. So first thing is to get treatment and second thing was to schedule and always engage in self-care – whether it’s meditation, yoga, mindset, whatever that might be.

Also to connect with others who have struggled, to hear their story and to relate to them, and to share my own story. I openly share my struggle with addiction and anxiety and when those messages come in and you hear people say, “I felt the same way and hearing that inspired me,” makes me feel like it’s served a real purpose, that suffering.

The people that I get to meet and connect with, that’s probably the best thing. I get to work with other coaches, actors, artists, entrepreneurs – people that have chosen to jump, to take that leap of faith. To be able to get to work with these people, who consider what they do a calling, has been tremendously rewarding for me.

The advice I would give is to see yourself as a solution to a problem, to see what problem people are having, and then really go out and solve that problem. Not to bash marketing, because marketing is important… but let me ask you this: if tomorrow, I had the cure for cancer in my hand, would I have to market it?! So what solution to a problem can you create that really wouldn’t require any marketing?

“How will you serve the world? What do they need that your talent can provide? That’s all you have to figure out. As someone who has done what you are about to go do, I can tell you from experience, the effect you have on others is the most valuable currency there is.”

People will remember how you made them feel over what you did for them. So if you can combine a feeling with an actual result, you’re in the top 10%. And it might take a little while to do this; you might have a really great idea and it might not catch on right away; but if you’re committed, anybody can do it. So: what problem am I solving? How am I helping move people from here to here, and are they going to find that of value?

Also a word of caution: everybody forges their own way. It’s a balance of learning from and modelling others; realising that just because someone says something worked for them, it doesn’t mean it’s going to work for you! There are so many variables – they were doing it at a different time and things changed quickly, they’re them and you’re you! So this idea that someone is going to sell you a model, cookie cutter – I find this not necessarily true. Trust yourself and trust that you have your own path.

Anybody who has ever accomplished anything of value will tell you behind closed doors that it’s never fast and it’s never easy! It’s going to take ten times more work and ten times more time than you’ve ever imagined; and when you go in with that mindset, that mindset will help carry you through the tough times.

Find out more about Michael on michaelcinquino.tv – “Anything you want is on the other side of a camera.” The book Michael recommends in the interview is The Mystic in the Theatre by Eva Le Gallienne.