This month’s Fearless Fridays interview is with Santosh Sali. He got in touch with me a couple of months ago having found a link to the interview series on Quora. As it turned out, not only did he have his own career transition story, having changed from a high-profile IT role in investment banking to a career in academia, but his research area is actually career change. What better candidate could there be for the interview!

Santosh brings up an interesting observation about the cultural expectations in Japan, where he was based at the time of embarking on the transition. Here, more so than in European or American society, the norm is very much to work your whole life in the same company; the idea of changing jobs, let alone career, is quite foreign to traditional Japanese culture. Santosh makes a great recommendation here, which I always emphasise as well: make sure you’re very clear on why it is you’re changing, so that you can tell a compelling story both to yourself and to those who question your choices.

Career change is becoming more common, though perhaps at varying rates in different countries – whether it’s a question of leaving full-time employment to become freelance or start your own business, or changing to a different career altogether. After graduating from university in the 1940s, my grandmother applied to a job as a (male) clerk at the Swedish national tobacco company and once she got that job she stayed there, working on company pensions, until she herself retired. This is not unheard of today – at companies like Procter & Gamble, where there is a ‘promote from within’ policy, the higher ranks of management are filled with company lifers – but it’s certainly getting less and less likely. Having a ‘proper job’ no longer guarantees a secure income for life. (I just watched the film Up in the Air with George Clooney, in which he flies around America firing people who’ve given their life to their employer – fiction, yes, but it happens.) The famous Millennials, not to mention the younger generations coming up behind them, are looking for continual personal and professional growth, they want to make sure their work is truly meaningful, and a majority of them in fact are hoping to become entrepreneurs – so we’re seeing a huge shift in the career aspirations of graduates.

But clearly it’s not just the younger generations, given my own experience (some would say I’m a Millennial) and those of other more experienced professionals I’ve spoken to. Read on for more from Santosh!

Leaving a corporate job behind to follow your passion: From finance to academia 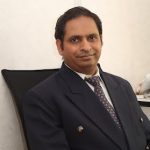 Santosh Sali was born and brought up in India, studying mechanical engineering in a reputed engineering college (COEP, Pune). Having started his career as a techie in the financial industry, he switched to academia, as a Faculty member in business school. Currently he has taken a break to complete his dissertation as a part of his research degree.

At some point, I started feeling that I was not using my full potential at work. I started having an ‘inner feeling’ that work wasn’t exciting at all; I was just going through the motions every day. I started by searching for enjoyment and happiness outside the work place, but I felt that probably this was not what I wanted to do for the rest of my life. I needed to do something that I would enjoy; I needed to be in the place where I ‘belonged’.

I found almost no help in deciding “where to head to”. So what would be my next choice? How would I find it? I think this was the biggest challenge.

Also at that time I was in Japan, traditionally where people work most of their life in one firm or one job. So the idea of changing career was a paradigm shift for many of my peers. And even sharing my thoughts openly was difficult.

So that period of leaving career one and searching for career two was very, very challenging.

I think I searched mostly on my own. Two people proved crucial in support, however. The first one was my spouse, who wholeheartedly supported the change. And then one of my friends from the early days, who is now a professor at a business school, was of good help in transitioning. He himself kind of changed the career track to academia, so his example and his own path helped me. It also validated the thoughts that were rampant in my mind.

It is challenging and pretty demanding as a graduate student. From the outside we feel that academia seems easier, but it is not so. In fact I don’t know anything else that comes close to academic work in terms of the cognitive demands. But the very fact that this struggle excites me to read, to think deeply, is very rewarding. It is also exciting to know that my work will be contributing back to the knowledge bank.

In terms of lifestyle, it is my choice, my time: I set my schedule, my holidays and my agenda. There is enormous autonomy and freedom in this.

Perhaps most importantly I know that I am touching the life of my students in a positive way.

Ask yourself “Why?” Why are you making the change? This should be very clear to you. Your reason should appeal to your heart and only then will you be able to convince your significant other and tell your peers a convincing story around it.

Santosh chronicles his learning journey as a graduate student of organisational behaviour on his blog.