I met Annie Ross on a paddleboard in the River Thames. At the time, she was “on her way out” of banking, although still confronting a lot of fears around what that could mean. Having realised that she wanted to do something different, she set herself a challenge of 52 sporting challenges in 52 weeks – and our paddleboarding weekend was one of those challenges.

The ‘Exerk Yourself’ challenge turned out to have a positive effect on Annie’s work, giving her job purpose during a time when she didn’t want to make any drastic changes. It also made her new project fun rather than having the pressure to start earning money and turn it into a business right away. Eventually, though, it also gave her the platform and the confidence to take the leap and focus on setting up her own business.

As Annie says, she’s now “obsessed with helping people get active”. I love her message that you don’t have to climb Mount Everest or take five months off to travel across the Americas. You can build adventure and fun into daily life. There’s also an element of bringing people together and using these activities to create a sense of freedom and purpose outside of whatever’s happening in your life, for example, when you’re considering a big career or lifestyle change.

Read on or watch the full interview below to find out about the thought process that Annie takes herself through whenever she has doubts, and the total flexibility that her work allows her these days.

Leaving a corporate job behind to follow your passion: From teaching to photography 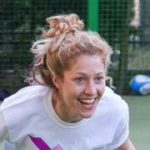 Having been working at Deutsche Bank for five years, Annie initially set up Exerk to spend more time doing what she really enjoyed, which was staying active. Organising a year of 52 sporting challenges in 52 weeks alongside her full-time job gave her the confidence and the platform to eventually hand in her notice. Today, she’s building this into a more structured programme for corporate women who struggle to find the time to be active.

The final trigger was that I was offered a job via a contact that I’d made from a press launch, having been writing as a fitness columnist for the Evening Standard, who had picked up my blogs. I met this guy who, a couple of coffees later, said, “Let’s look into you working for us.” That gave me the confidence that I could get a job outside of banking – this was at a big sports company. I handed my notice in off the back of that being a possibility. While I was working out my notice, I finally realised that I didn’t want to go and work for this sports company because it was effectively just another office job.

I let myself have no plans for a whole two weeks(!). Then a friend of mine suggested a company called Impact Marathon Series, who were launching marathons around the world. It was this perfect combination of having freed up my time, wanting to speak more Spanish, loving organising sports events and bringing people together – and someone who was willing to fly me out to Columbia to do it!

So I ended up in Columbia two weeks after I quit Deutsche Bank, on my own for six months organising a marathon. It ended up not happening sadly, but all the work was put in and it was amazing. I did Columbia and Nepal with them, race directing Nepal and project managing Columbia, and there is nothing I would rather have done for my first seven months out of banking. It involved travelling, working, and engaging with people in a really different way, in a different country doing a different job. That gives you confidence by chucking you into different situations as you realise that if you can work in three different countries in the same year, one in banking, one project managing, and one race directing, you can probably do a few other things as well!

After the Impact Marathon Series work, I used my Evening Standard column to travel for a bit and write travel reviews. It was a natural decision after that to come home and be with my friends, my network, and create a business – calling a day on that nomad living in South America. Since then, it’s been weird, because you come back and everyone says, “Oh my God, you’re back! You must be back for a reason” – and the answer is, “Yes, but I don’t know what that reason is yet.”

There has been a lot of excitement but also not knowing who you are anymore. Before, it was, “I work at Deutsche Bank, I did this, I did that” – not knowing what I was doing now made me feel really fidgety and anxious. Not having a purpose was really difficult for me. Every three weeks, I’d get really excited about another idea, I’d go full on into it and I’d meet with HR companies from big banks to talk about their corporate wellness stuff, for example… and then something would happen, and I’d just go off the boil a bit. Then I’d pick up the next idea and run with that.

That was tiring for me and it was tiring for other people. It took time to step back and stop putting pressure on myself, to give myself the space to commit. I signed up to a marketing seminar, and it all kind of unravelled like a big knot that was there in my mind and my heart, and gave me a clearer path to what I’m working on now.

It’s weird as you’re only answerable to yourself, especially for someone like me who expects a lot and puts a lot of pressure on myself. There were days when I felt like Deutsche Bank had been a really easy lifestyle, in comparison! So that says a lot about how low I felt at various points.

You have to stop yourself every now and again when you find yourself on the Guardian jobs website! I still have those days when I think, “Let me just see what’s out there, just in case.”

I went through the process of asking myself, “Should I go and get a job? Should I just go back into banking and make life all rosy and salaried again?” So you sit down and you ask yourself questions: “Is it because you want money?” In my case, “No, my insecurities are not around money.” Then I would ask, “Is it because I’m lonely and I want to work in a team again?” “No, because I can engineer that into my life.” “Is it because I want to be learning in a different way, being put on education courses by the company or just learning from other more experienced people in the team structure?” And again, “No, I’m doing enough courses, I’m doing really interesting things, I can say yes to anything I get invited to at the moment if it fits in with the strategy…” So I was able to rule that out.

I’m also a big believer in the power of people. I have no qualms about sending off an email to any company or person that I think looks interesting. That has led me down some awesome and has been my number one thing in that respect. It can seem like there’s a lot that I’ve done on my own, but behind that you’ll find other people’s advice, ideas or even just a chat over the phone.

Total flexibility. It’s up to you to fill your time, which is a beautiful thing. In the corporate world, our time is filled by other people, our diaries are manipulated by our bosses, by our team assistants, by our colleagues, by our friends in the evenings… One of the main reasons that I wanted to step back from London was that to meet up with a friend, we were looking four weeks ahead! Now, flexibility means that I can give more time to friends, more than just between the hours of 7 pm and 9 pm one night every four weeks. I can say, “Hey! I’ll pop by and see your new baby,” for example.

I do have to be careful so that I set limits on the amount of work I do. And, although I said the power of people was the biggest support for me, there is also the problem that you can be too “yes-y” – you can end up having all these calls all day that interrupt your concentration just for the sake of having a call. I am very easily swayed so if someone comes over here with a really good idea, I will spend half the day considering that, before pulling myself back on track.

There’s a book that I love called The Art of Essentialism: The Disciplined Pursuit of Less by Greg McKeown. Life is about trade-offs, and if you want to build something new into your life, you have to get rid of the fluff. Every now and again, you just need to take out the stuff that isn’t working for you anymore, get rid of it, and work out what you really want to be successful and happy. Otherwise, everyone else will chuck their old laundry at you!

The thing I’m trying to tell myself – I don’t know if it’s advice – is to take life less seriously. I think if you’re anything like me, you put a lot of pressure on making the most of each moment and all that media around us reinforces that that’s the way we should be living. But if you’re naturally someone who does that, it can mean that you don’t actually enjoy those things. You want to enjoy the ride!

Hopefully, that’s a nice reminder to people who are moving out of the corporate world and into the other side of things, which is more volatile, can be just as stressful, and is more rewarding but in very different ways. You just need to enjoy it and be curious: “Oh, this is a new way of having a conversation, or of being paid – interesting!” And then you can reflect on that later. But overall: take life less seriously!

Since we spoke in the interview, Annie has continued to evolve her project and made the decision to launch her programmes under the existing umbrella of Exerk. You can read more about her programmes to help you build an active lifestyle “that can survive life’s twists and turns” on her website and follow her on Twitter and Instagram.