For this month’s Fearless Fridays interview, I’ve been talking to another digital nomad extraordinaire, Kit Whelan. I met Kit in Barcelona in October at the second year of the 7in7 digital nomad conference, which she co-founded with her partner Nick as well as Kyrie, whose story I shared last month.

In addition to being a co-founder of the 7in7 conference, Kit is a freelance social media strategist, as well as the creator and host of Nomad and Spice, a podcast dedicated to supporting location-independent women. An early adopter of the digital nomad lifestyle, Kit has been travelling for almost a decade, and discusses the importance of community when you’re living on the road, as well as balancing a love for travel and the desire to make an impact with your work.

Watch the full interview or read on for the highlights of Kit’s story!

Leaving a corporate job behind to follow your passion: From ad agency to digital nomad pioneer 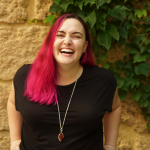 Kit Whelan has been a digital nomad for nine years, having started her career in an ad agency and then working on the Obama campaign. She runs a social media consultancy, mostly working with small luxury hotels, and co-founded the 7in7 conference for digital nomads. She also co-hosts the Nomad + Spice podcast for location independent women… and is obsessed with cats and space travel.

After finishing university, my goal was to get a job at an ad agency. Thankfully, it was before the Great Recession in the States, so it was not that hard to get a job then. I remember hanging up the phone after getting the job offer and thinking, “Is that it?”

I’d worked really hard in school and university, and done all these things so I could have a good resumé. Then I got the ‘good job’, the last societal finish line.

I enjoyed my job, I really did, but after a few years, it was just so repetitive; I didn’t feel like I wanted it. I desperately wanted to travel more than the paltry two weeks a year that they give you in American companies and I just wanted more out of life – more adventure, more excitement. So that’s why I originally quit my full-time job to work on the Obama campaign, because I felt like I was doing something that was bigger than myself. I wanted that to continue. For me, going back to a full-time job would have been going backwards.

At the beginning, I was so focused on the travel that taking time for work still seemed like an inconvenience. Now, I have three businesses that I take a lot of pride in and I spend a lot of time working on them – my perspective has definitely shifted. But when I began, remote work was still very new. It was a lot harder, with potential clients asking, “Where are you located? What are you doing?” They were often a little nervous and I would have to negotiate with, “Just give me three months and we’ll see how it goes.”

I travel and work with my partner so there are also challenges of a more personal nature. Honestly, for me, being the 24/7 couple is great – but I know that’s really challenging for a lot of people. For us, as long as we’ve got a good pair of headphones and can have our separate time and space, we’ve done pretty well as far as the whole “work-together-all-the-time” thing goes!

For me, the biggest thing that you could possibly need for a nomad lifestyle isn’t just making money from your laptop, it’s the community and support: that is the most important thing. And in the early days, when I was more focused on my travels than on work, it was mostly just Nick and I. We would meet people wherever we went and that was fun, but we didn’t have a long-term support network.

Obviously we had our families, but that wasn’t the same as having a really solid support network. We stumbled into one when we were in Berlin the summer of 2013 to 2014 and there happened to be a lot of other nomads there at the time. This was still during the time when if you met another nomad, it was like finding a unicorn!

It was like, “Oh my gosh! You’re a nomad too? We’re best friends now.” We started hanging out with these people, having movie nights, then hanging out every weekend, co-working together every day during the week. It was like having this little nomad family for the first time, and that’s when I realised what we’d been missing. I’ve now worked to build that for myself.

I started a conference to make more friends and to show other nomads that this is what you need, this is what you’re missing. Over the years, I’ve seen a lot of people drop out of the lifestyle and usually that’s because they’re lacking community. They’d say that they felt lonely, they said that they missed having that community, and often they’d end up going back home.

That’s a perfectly valid choice, but you don’t have to do that. You can absolutely gather your own network and your own nomadic family and have that support system no matter where you are.

The best part for me is the community; but I think still the best part of the nomad lifestyle in general is just the freedom and the ownership of my time. When I had a full-time job, a great apartment, great friends etc., what shaped me a lot was that fact that I was living on someone else’s schedule – I was working for someone else’s goal and I had no time for myself. You end up just living for the weekend because by the time you’ve arrived home from your job, you’re just exhausted.

There’s no time to do anything for yourself and even now, if I’m stressed because I’ve taken on too many projects, I end up feeling like I have to remind myself that I chose this: I’m the one who gave myself this work, I’m the one who chose to do these projects. I’m the one who decides when I wake up, I decide when I work. I decide where I live and what I eat. Everything is my decision so if, at any point, I’m miserable, it’s my own fault… there’s no boss to blame.

So my favourite part of the lifestyle is definitely the freedom.

Stress less. Things will work out – you don’t need to have everything planned, and failure is good, you learn from it. And I think the most important thing is to find yourself a community.

To non-nomads (we like to call them Muggles!), you will always be an oddity. They’ll say, What? You don’t have a house? You’re just travelling? You work from your computer? How do I do that?!” and you might feel like you’re coaching people sometimes.

You need to have people in your life who completely get you. People who can support you through what you’re doing and have been through those situations. That’s the most important thing.

Read more about Kit’s social media consultancy on her website Kit + Co, discover her podcast at Nomad and Spice, and read more about the 7in7 Digital Nomad Conference on the 7in7 website. You can also find her on Twitter and Instagram @KitWhelan.