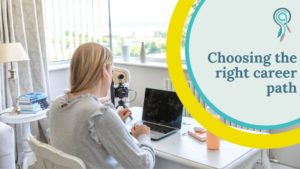 I gave a talk the other day about the importance of defining what success looks like for you as an individual, and finding a career in which you can really make a meaningful difference. After the talk, a number of people approached me with their own thoughts on this. Several of them – and these were people who were doing a job that was definitely in the ‘meaning’ camp – told me how much the message had resonated. They were thrilled with their personal choices, which had often been difficult, and observed the disillusionment and burnout of their peers who had gone into the more conventional ‘money’ choices of banking, consulting, and so on.

Of course, I’ve been working largely with that latter group, just a bit further along in their careers: after ten years or more in that environment, they are now looking for the meaning that’s been lacking to date. In my monthly Fearless Fridays interview series, I talk to individuals who have taken the leap from their corporate or at least more ‘conventional’ jobs into the unknown of following their passion, doing something more creative or altruistic, and often starting their own business.

That’s also been my own path: I followed the conventional route after school, university, corporate job – and then I quit to try to find my way back towards some greater meaning. But what if I had started off with that meaning, or passion, instead? What if I had gone into journalism first? Or tried to make it as an actress? What if I had got that job I wanted in the UN or children’s rights NGO? Would everything have been hunky-dory?

I’m curious to examine the case for looking for that meaning right away – and then the other side of the argument, the more conventional recommendation to work hard in a good job so that you create better opportunities in the future…

So, first of all: no one I’ve ever met who followed their heart – and I’ve met a lot now over the years – has ever told me that they’ve regretted it (whereas I know plenty of people – among them my clients – who regret their corporate choices and now want to do something about it). Maybe it’s because they don’t know any better, and they’ve never been tempted by those prestigious job titles and six-figure salaries, they’ve never experienced the call of the lavish Christmas parties and offsites?!

A common assumption when it comes to following your heart or your passion is that you will earn less money and on top that there will be a higher risk associated with that path. The truth is, though, that you can fail at something you don’t enjoy as well – so surely it’s better to risk failure at something that is really meaningful to you?

I believe that having the passion and interest for your job will mean that you are so much more motivated to work hard and more persistent in the face of challenges. You will learn faster, get better at what you’re doing, and ultimately create better results.

Those who tell themselves that they will pursue more meaningful work “later” may also be fooling themselves. At best, they’ll be working late into the night to earn those high salaries and may find that they burn out so that they are forced to make a change at some point. At worst, they’ll never get round to that passion project at all, as the doors to those childhood dreams have been closed simply by the passage of time.

I often refer to the top regrets of the dying, and these include:

“I wish I’d had the courage to live a life true to myself, not the life others expected of me.”

“I wish that I had let myself be happier.”

Knowing that, therefore, why not avoid those regrets and go with your heart and your happiness as the number one priority from the start?

The old me would have tended to believe all the statements in this area: that we should pursue a sensible career that will give us skills and experience that we can use later to do what we really love. In the last few years, I’ve been rejecting that idea and questioning all the assumptions on which it’s based. Now, I may well begin to see some wisdom in the argument again!

The key benefit I see in following the more traditional career path is that it builds your career capital, which will then pay dividend later in your career. This includes skills, training, experience, as well as your network and even savings in your bank account. Continuing your studies at prestigious universities, joining impressive graduate schemes, and going for jobs with a formidable reputation such as management consulting – all these choices do undoubtedly give you an accelerated launch onto the career stage. The corporate sector will give you faster advancement, these employers have more bigger budgets to invest in capability building, and they are likely to be a great selling point on your CV.

Again, looking at my own career trajectory, I gained expertise in marketing and brand building of course but also leadership, team collaboration, project management, people management, public speaking, etc. at Procter & Gamble. I also gained a fantastic network of professionals across different industries and it was this network that first made my foray into consulting successful, both in terms of my expertise and in terms of having been recommended to the position by former colleagues. Even my career coaching would not have materialised if I hadn’t gone through my own career transition, i.e. if I hadn’t had that initial corporate experience.

There is a book by Cal Newport, So Good They Can’t Ignore You, in which the author argues in favour of this idea of first building your career capital – in whatever area – as “skills trump passion in the quest for work you love”. I certainly won’t disagree with the idea that it’s best to be good at what you do!

This route can in any case be a good way forward if you really don’t know what is your passion or your calling or whatever you want to call it; or if you are 100% certain that it won’t make you any money! If you can’t afford to follow your (less-well-paid) passion as you have debts to pay off, a young family to look after, etc. then postponing such a move to a better time may be wise. Consider the bottom of Maslow’s pyramid: you need food and shelter before you can get on with self-actualisation. Just make sure you don’t put it off indefinitely as there will never be a perfect time!

Whatever you do, do it with intent!

As ever, I’d argue there is no right answer.

For me the crucial point is that whatever decision you make you must make it yourself – without being heavily influenced by the expectations, fears and preferences of other people – and make it with intention. So don’t just continue on that conveyor belt into the obvious choices after university (or even university in the first place), but by all means choose that graduate scheme if you think it’s something that you will enjoy and you recognise the consequences of the choice that you’re making.

It’s also not as black and white as we tend to make it in our decision making: even if you choose not to go for your big passion as a career straight out of university, at least for the time being, you can still consider how you might find an outlet for that passion outside of work. In my case, for example, I loved acting and although I never pursued it as a career I became very active in local amateur dramatic societies; and I loved writing and found an outlet for this at least initially on my blog.

So what do you think: meaning and passion first, or money and career capital first? Which path did you follow? Do share your thoughts in the comments below!