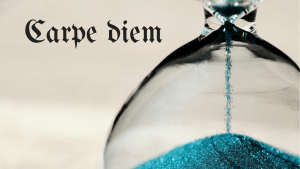 At some point during secondary school, aged 12 or 13, I discovered the phrase carpe diem. There was something incredibly appealing about the idea of SEIZING THE DAY, doing what you want, not wasting time – and it was in Latin, giving the idea a certain gravitas! Somewhere along the way, though, carpe diem has become a cliché, an overused slogan that no longer makes you think about what it actual means.

This was the topic of the Sunday Sermon I went to at The School of Life last week. I’ve been following The School of Life for some time but it was the first event I went to: a talk by Roman Krznaric presenting the key ideas in his new book, Carpe Diem Regained: The Vanishing Art of Seizing the Day. I seized this opportunity, having read his book How to Find Fulfilling Work back in 2013 as I first started considering a career change.

Krznaric started by citing examples of carpe diem in modern culture: Judi Dench’s tattoo that she got on her wrist for her 81st birthday; the Metallica song Carpe Diem Baby; as well as the Nike slogan #justdoit and the more annoying YOLO (you only live once). Famously it’s also the rallying cry of Robin Williams and his classroom in Dead Poets Society, referring to the original source, Horace Odes 1.11, which ends:

‘Seize the day, trusting as little as possible in tomorrow.’

As I learned, carpe can also be translated into the less aggressive ‘harvest’, ‘enjoy’, ‘pluck’, suggesting a slightly different interpretation of the phrase, and in fact Krznaric proposes five different definitions. Here are the different ways in which we can carpe diem:

Probably most of us would think of this when we think of carpe diem, in the sense of jumping on an opportunity when it comes along, whatever your fears and the possible risks. Unfortunately, most of us are naturally risk averse, so we tend to focus more on everything that could go wrong than on all the things that could go right – thereby often missing out on something that could have been amazing.

The mindfulness movement would focus on this interpretation of being in the here and now, living in the present moment. However, Krznaric pointed to one of my long-time favourites, Viktor Frankl, and his book Man’s Search for Meaning in which he argues that it’s not enough to live for the moment but that you must live for the future, to strive for some greater meaning.

This is a tricky one in a world in which we all suffer from busy syndrome, with packed schedules and inflexible deadlines. Krznaric pointed out, though, that this lack of spontaneity dates back as far as the Protestant Reformation – during which carnivals and summer fairs and public dancing were banned – as well as the Industrial Revolution, with its increasingly regimented life according to the factory clock. Funnily enough, Krznaric admitted that he has to plan spontaneity on Sunday afternoons – a contradiction in terms, perhaps, but also a smart way to leave some space for some spur-of-the-moment decisions and unexpected activities.

Carpe diem might also be said to support the case for indulgence, sensory pleasures, free love and gastronomic experiences. Here Krznaric referred to the puritanical streak that we see today in self-help books and a push for moderation and self-control, except perhaps in TV watching where we’re happy to binge watch Netflix with no holds barred.

Krznaric’s final interpretation of the phrase was in the realm of politics, where great change can be brought about not through institutional acts but via unpredictable and spontaneous action of the masses. As he said, this is the phrase in its plural form, carpamos diem (- I never studied Latin so I’m a touch fascinated and impressed by this kind of talk!).

Krznaric sees this desire to carpe diem as coming from the two existential drives of freedom and death – and this is consistent as much with my own thinking now about life and meaning that has emerged from my coaching work as with my scribbles on my notebook back at secondary school. There’s a strong human desire for freedom and the understanding that we are in control of our actions, our own destiny; but it’s the knowledge that we are going to die at some point that gives us a framework for that freedom, a sense of urgency and motivation.

In this context, Krznaric referred to the famous speech by Steve Jobs at Stanford back in 2005. If you haven’t seen it, and even if you have, I’d encourage you to watch the whole thing; the piece on death starts at 09:04.

Now, it’s not about living as if today would be your last – if you did that, you’d never work hard at anything, you’d never achieve any big and meaningful goals in your life. But remembering that life is fleeting, that, as Robin Williams’ English teacher in Dead Poets society would have it, “We are food for worms, lads,” is what helps you to focus your time and energy on what really matters.

So I leave you with the questions that Krznaric asked us:

In my case, I’m more than happy to embrace my hedonistic side! And I’m already working on being more spontaneous and intuitive (yes, these things do tend to require a bit of practice and effort sometimes!).

There’s no better time to seize the day than now! Especially here in the northern hemisphere as the sun is coming out and we have an opportunity to go outdoors and see, feel and experience the gorgeous world out there.

So go forth and carpe that diem! Who knows what it will bring…

“Yesterday is gone. Tomorrow has not yet come. We have only today. Let us begin!”