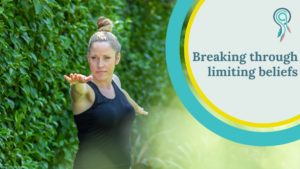 In last week’s post, I wrote about fear as a barrier to taking action: fear of failure, making mistakes, making the ‘wrong’ choice… Some of those fears may be very reasonable, while others are either unlikely or completely misguided. You’ll want to sort through these different types of fears so that you can begin to see which of them are imagined and which need to be dealt with. This means breaking through your limiting beliefs.

As a start, I suggested confronting the ‘worst-case scenario’ in last week’s post. To take this even further, though, you need to go a bit deeper. And if you look at where these fears are coming from, they’re usually based on a set of beliefs and assumptions, which in turn are usually inherited from your parents or from the society in which you’ve grown up. And to overcome your fears so that you can move forward, you’re going to need to challenge some of those beliefs.

What do I mean by beliefs?

Beliefs are rules that you’ve created that provide a framework for how you live your life. Often, they’ll be things that you don’t even think about, so deeply ingrained are they. And these beliefs are going to inform your behaviour, consciously or subconsciously, and, over time, will become part of who you are.

What they are not, though, is incontrovertible facts! Without getting too hippy and esoteric, the truth is that the world is what you believe it to be. Taking a simple example: if you believe that people are inherently mean and selfish, then you will actively look for evidence that supports that belief – and you will find it! If you believe that people are inherently good and trying their best, well, then you will find ways to explain people’s behaviour that support that belief instead.

So you can go on and keep holding onto the beliefs that you’ve grown up with – that you’ve been taught through your upbringing and your education – or you can recognise them for what they are, i.e. beliefs. With this new perspective, you’re now freed up to create new beliefs, and change your behaviour accordingly.

Beliefs in the world of work and career

Let’s look at a few other examples of beliefs, specifically in the context of leaving the corporate 9 to 5.

Examples of beliefs around the way of working:

“Having an employer gives me security”

“Work isn’t supposed to be enjoyable”

Examples of beliefs around your goals:

“It’s irresponsible to go after what I want”

“I have too many passions”

Examples of beliefs around money:

“Rich people are selfish and greedy”

Examples of beliefs around your own abilities:

Examples of beliefs around your growth and development:

“I should be able to do this by myself”

“I can’t afford to invest in myself”

These are all beliefs – they’re not irrefutable facts, and they’re only true to the extent that you believe in them.

As you take a look at your beliefs around work and career and money,  you need to ask yourself: “Do I want to keep believing these?” And, if the answer is “no” – then the next step is to change them!

It can be quite scary to challenge a fundamental belief that you’ve held for as long as you can remember. It can shake the very foundation on which your life, or even your identity, has been built. And it will mean taking ownership of your choices instead of blaming your parents, society, or whatever other external reason you’re holding onto for why you’re not able to do what you really want to do.

When you choose to change a belief, the effect can be immediate. You can simply choose to believe something else – and that’s it! Once you’ve opened your eyes to a different perspective, you’ll find more and more evidence to support your new belief.

Of course, it may not be that simple, and you may find that you behave in a way that still reflects one of your old beliefs. If so, take a deep breath and remind yourself that this is no longer a belief that you hold – and choose to change your behaviour accordingly.

Every thought you have, every belief, is a choice. Changing your beliefs will change your behaviour – and this is what will allow you to achieve those big dreams that might previously have seemed completely unattainable.

So what are the beliefs that you are holding onto? And what would happen if you let go?