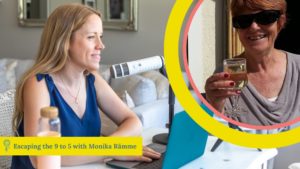 All the interviews so far in the Fearless Fridays series have been about daring to make that one big change, taking the leap from being employed by a big company to starting out on your own, from corporate office work to something more creative – and then they all lived happily ever after… But what if it’s only the beginning, what if you don’t find that one single Career with a capital C or you’re simply the kind of person who thrives on continuous change, pursuing challenge after challenge, your life an endless journey of twists and turns?

Monika Rämme is someone who left her first office job in the 1970s and never looked back. Well, in fact, she did end up going back, then left again, and over the years has experienced many different roles both professionally and in her personal life. Her story is one that might seem exhausting to some, enviable to others, and reassuring to all, in showing that you really don’t need to find just one answer to how you want to live your life…

The benefits of having many interests 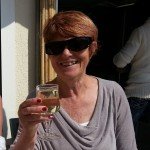 Monika Rämme made her first leap in the early 1970s, when she left a secure and quite well paid job at Televerket (now Telia) for a course at the Academy of Cutting and Tailoring in Stockholm. Taking classes during the day, she took a cleaning job in the evenings, earning enough money for food and rent while saving so that she could visit her friend who was living in Spain. She even met a man, whom she married and with whom she had a daughter, Martina, who could be dressed up in various sewing projects from Monika’s newfound skill. Since then, Monika’s life has consisted of many different changes into new and unknown territory. Some minor, some major, but with each change has come the experience and confidence to move on to the next one.

I’ve always been a restless soul, impatient, pushing boundaries, ever curious about the world and its possibilities. I’m also quite tenacious and will face any problems head on in order to sweep them out of my way. So I’ve made many changes, both in my private life and professionally. Most of my big changes came out of frustration with the on-going situation and a desire to be able to better govern my own life.

I also believe in a degree of fate: different possibilities have presented themselves to me in different ways. After my maternity leave, I longed for more intellectual stimulation and found a fun job in sales at Televerket. I later left the public sector for the corporate world, becoming a purchasing manager and studying at the IHM Business School. For a while, I ended up back at what had become a private company, Telia. In 2001, I once more decided on something new and unsafe, starting a consulting business with a friend – that lasted 12 years, and we had a lot of fun though we didn’t make a lot of money. My next change led me to launch an online jewellery store and as of today the business is still growing.

2) What was the biggest challenge you faced in making the various changes?

Lack of money primarily. Lack of security never bothered me, as I always believed in my own ability to fix things.

It certainly wasn’t all a bed of roses, though. I went through many personal changes, divorce, moving, building a house, almost ending in bankruptcy at one point. The hardest time was in the early 1990s, but eventually I came out on the other side.

3) Where did you get the support you needed to make these changes happen?

My parents were fantastic throughout my journey, encouraging me whatever I decided to get myself into. Now that they are no longer around, I rely on several very dear friends and my extended family to support me. Starting up the consultancy was only possible with the cooperation of my friend and colleague Åke.

I am my own master, working when I want to, developing a business that I love. I’m free to take time off to walk my dog, fetch my grandchildren from school, sleep late… I have nothing more to prove, only more exciting challenges ahead. What more could I wish for?

If you’re lucky enough to speak Swedish, then take a look at Monika’s online jewellery shop, in favour – ‘for jewellery that gets you noticed’.