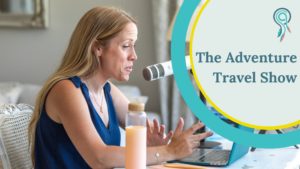 A lot has changed for me since I went to the last Adventure Travel Show in 2015. At the time, I had only been on one secret adventure and I knew no one at the show. I spent the day alone, listening to Ranulph Fiennes and then collecting brochures from all the different travel companies as I began to scheme about going off on one of their exotic trips.

Since then, although I never went on any of those trips organised by the travel companies, I’ve been on many adventures, big and small. I’ve been injected into a whole community of full-time adventurers and their followers, interconnected ‘tribes’ of like-minded people with an adventurous spirit. This year at the Show, I spent the day watching friends up on stage and chatting to those sitting in the audience beside me, while meeting many others – some that I recognised from interactions on Facebook and Twitter, others that were completely new faces.

One of my favourite talks of the day was Sean Conway and his message to #findyourbeard. A real-life Forrest Gump, he encouraged us to aim higher, to not be afraid of falling, and to take the leap. For Sean, the message to #findyourbeard is quite literal: he underwent a physical transformation from being a clean-shaven young man to a yeti in his thirties.

Sean identified a triangle of three factors that contribute to your happiness in life: money, relationships, and purpose. A lot of us forget about that last one, and in one of the round-table discussions of the day, Dave Cornthwaite echoed the value of having a purpose also for your individual adventures and travels: whether it be simply writing a diary, meeting people, taking photos, sketching… having a purpose for your trip will ensure you’re getting something out of it, something that you’ll remember for years to come.

Money, of course, is one of the biggest concerns that people have when considering taking time off work or quitting to do something a bit different, like changing to a more creative career or starting a business. As Duncan Milligan pointed out, however, “The less money you need, the more opportunity you have.” He talked about one of his first jobs where he earned $14 a day – but since he had no flat, no car, no outgoings at all at that time, he could spend all that money on beer! He was “eternally poor but experience rich”. As you make changes to your lifestyle, you’ll find that you’re spending much less money and as a result you’ll also need less. The money you do have you’ll be investing in experiences, rather than things.

There are other fears, too. Fears of making the ‘wrong’ choice, of things going wrong. Ness Knight talked about how she has created new neural pathways over the years: she has learned that confronting her fears will lead to great things, in a paradigm shift that has made her more confident and comfortable in all areas of her life.

Of course, it’s not all “roses and cream” (an expression rather unexpectedly coined by Dave Cornthwaite to capture some idealistic vision of what being an adventurer is all about). It will be tough at times – “get over it!” says Sean. Anna McNuff, who recently ran the length of New Zealand, told us how she has learned to embrace the tough times and in fact it has been the act of sharing these less glamorous moments with her followers that has been the most rewarding. Adventures are messy, life is messy, and the democratisation of adventure thanks to the internet and social media has allowed this real and authentic insight into both the highs and the lows.

If you’re sitting there thinking, “Wish I could do that…” – you can! Have you been considering some epic journey, a personal quest to be the first to do something; or maybe you have a goal on a slightly smaller scale? Adventures are no longer the domain of “grumpy old men” says Dave. Here are some final tips from the various speakers of the day:

The Adventure Travel Show is on every year at Olympia London and brings together adventurers and adventure travel companies to inspire and educate on the latest travel experiences.