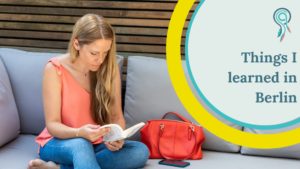 During these last few years of exploring and discovering, one of the people I’ve been actively following is Chris Guillebeau. Author of books like The Art of Non-Conformity, The Happiness of Pursuit, and The $100 Startup, he also organises an annual World Domination Summit in Portland, Oregon. Now if you look at a map, that’s almost as far from London as you can possibly get… and although I was tempted, the £2,000 flight ticket put me off just a little bit. So I tweeted at him, @chrisguillebeau let me know if you ever organise something in Europe! and as the engaged social media leader that he is he responded immediately, pointing me in the direction of Jana Schuberth who was organising Alive in Berlin. Almost a year later, here I was in Germany’s capital, spending the weekend with the most incredibly warm and open group of people.

In fact, it’s these encounters with my ‘tribe’– so many differences and yet so much in common – that I found to be the most powerful aspect of this event. Seeing how many different paths people can take, hearing their stories, having people ask me “So what lights you up?” rather than the standard “So what do you do?” and receiving unconditional encouragement for whatever thoughts or plans that I voiced… this is something that gives you a huge amount of inspiration and energy to go off and do all those things you’ve been talking about doing.

For me, having already made a number of changes in my life including quitting my job almost two years ago, I’m no longer blown away by the ideas that are presented at conferences like this one (although you should check out Kim Anami for some new perspectives on life…) and it’s more a question of reminding myself of why I quit, of fine-tuning, of continuing to learn and evolve.

1. There is a difference between being successful and being significant

This first one is from Zig Zigler, who wasn’t actually a speaker at the conference but was referenced by someone who was: there is a difference between success and significance. A similar idea also referenced comes from Gay Hendricks who argues that we should align ourselves with our “zone of genius”, the things that we’re truly outstanding at, rather than remaining satisfied with operating out of our “zone of competence” or even “excellence”. Which all reminds me of Seth Godin’s Icarus Deception, the fact that we’re so afraid of flying too high that we end up flying too low, which is equally dangerous…

It’s easy to turn up every day in the office and do a good job, to earn good money, and get good results. But might there be something else, something much more compelling, to be found in tapping into that powerful feeling of “flow”, in knowing that you’re contributing to the world in some meaningful way, in truly feeling alive? As oceans advocate Emily Penn put it a little more provocatively (and, of course, good-naturedly), “Don’t be a useless human being; don’t be a waste of space!”

2. Comfort kills ambition more than anything else

Dave Cornthwaite presents perhaps the more ‘conventional’ unconventional story of someone who was unhappy in his day job and found joy in a life of adventure, one that eventually manifested itself as Expedition1000, a series of non-motorised journeys each over 1,000 miles. He radiated energy and enthusiasm as he gave us a glimpse into his life, having discovered the thrill of trying new things. As he said, of course you’re crap at the beginning when you try something for the first time! So don’t give up just because it’s scary or it’s hard.

I’ve bought into this for a long time, and yet I’ve also observed how there is a constant bias in favour of the status quo. The easiest option is always to do the same thing, to stay in your current job, to stay in the city where you happen to be living… but we can only really grow outside our comfort zone. So why not experiment, go on an adventure, and see what you’re capable of? Let go of that safety net, close your eyes… and leap!

It’s Dave, again, who calls himself the “yes man” – Say yes more often! Yes is a doing word! – but sorry, Dave, I think in some cases what we really need is to say “no”. Say no to people making unreasonable demands, projects you don’t really want to do, things that make you feel heavy and tired… Say no to these things so that you create a space in your life and can say yes to all those things you really do want to do!

I know I have a deep-rooted desire to please others, to not let people down, to be that good girl that I feel that I should be. Couple that with insecurities about whether we’re actually good enough and it’s easy to see why we find it hard to stand up for our beliefs and desires, and to make the choices that feel right to us. But as Dave said, when people warn you of risks – whether it’s of quitting your job or travelling alone across South America or starting your own business – they are voicing their own fears, and you should really ignore any advice that you haven’t asked for. So say no to all that unwanted noise – and then start saying yes!

4. Inspiration without action is merely entertainment

The theme of the conference was about moving from knowing your truth to living your truth. When Jana Schuberth, the organiser of Alive, started telling people about her plans to create this kind of event in Europe, she met with the same response from a lot of people: “Oh, I was thinking of doing that!” Sure… but you didn’t! Actually executing an idea takes effort and time, it can be a lot of hard work. Without that work, as Chris Guillebeau put it at last year’s conference, without action, inspiration is merely entertainment.

It’s all very well to go to conferences, to sign up to courses, to talk about what you’re going to do… but until you do something about it, you haven’t actually changed anything. I talked for years about quitting my job before I actually did it; I spoke for months about travelling to South America before I asked for that sabbatical; and I did writing course after writing course before I finally started writing my own blog and sending off articles for publication. Thinking and talking and reading is a great first step; but then you need to act. Go. Do.

5. We should all be more like that nine-year-old girl

The star of the Alive show was one of the youngest attendees, nine-year-old Lara. Always smiling, she took it upon herself to draw a portrait of each of the conference speakers, walking confidently up to them at the end of each talk to present them with this gift. She came up to strangers even though she didn’t speak a word of English. She was always first on the dance floor, and moved with complete abandon.

I think back again to little Anna, the little girl who skipped, who danced like nobody was watching, who said what she thought, and acted with absolute spontaneity and authenticity. We were all that child at one time – and I think we could all do with being a little bit more like her now… 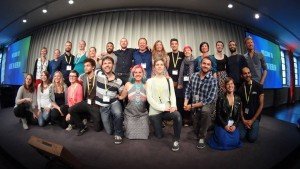