And so three months of the year have already passed, with 2015 set to be the fastest year ever recorded in history (– or is it just me getting old?). A good milestone for checking in on how we’re doing on our New Year’s resolutions or, if you’ve followed my approach, our theme for the year. Having done this for the last couple of years, I’m finding that a theme gives enough of a framework for you to focus your decisions and activities during the year without being too restrictive or onerous. The last thing you want is another to-do list that will only cause stress and feelings of guilt when you don’t manage to tick it all off.

My theme for 2015 is being active, physically active that is, and so far I think I’m doing quite well. #THISGIRLCAN! It really has helped me to make different choices – say, between doing another writing course and going on a bootcamp, not to mention between taking the lift and taking the stairs – and it’s a great focus for mixing things up after all that time I spend hunched over my laptop both at work and in my so-called spare time.

Back in January, I signed up to ten personal trainer sessions. Unfortunately logistical issues have meant that we’ve only managed to do three so far, but we’ll keep trying to schedule the rest! I’ve also had to suspend my gym membership for two months since I’ve temporarily moved away from the area. In the meantime, I’ve recently started to use the free Nike training app, which has deceptively simple exercise programmes that really make you sweat – yesterday’s session was called Squat Party; I don’t know about you but those two words really don’t go together in my world – as well as the Pocket Yoga app. (It’s all about apps! See my post on tricking yourself into getting fit.) And I did a whole day of boot camp in Hyde Park, which was a one-off but I can’t tell you the boost it’s given me and on top I no longer complain about a half-hour session at the gym or a 5k run, now that I’ve survived a full day in military-style training!

I’m also finally getting into a more-or-less-regular running routine. I had originally signed up to a half-marathon in Stockholm in April, ever the optimist, but a delay of almost a month of training because of a persistent bout of bronchitis has meant that I’ve had to accept that this is unrealistic. Instead, I’ve signed up to a 5k, my first, in May – much more reasonable! – and then I’ll gradually build up the distance over the year. 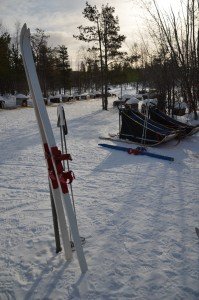 I’ve also done some fancier activities, with a week of downhill skiing in Verbier (a killer on the calves!) and a long weekend of cross-country skiing and dog sledding in the Arctic Circle with Secret Adventures. That weekend in Lapland involved running back and forth between the sauna and the snow in the traditional act of Arctic Rolls, with the freezing cold under the soles of our feet ensuring that we kept up a good pace!

So with three months down and nine to go, I’m feeling good and eager to keep moving…

I’ve still got several months to fill up, with plenty of activities to choose from my bucket list – who wants to join me?!

So how are you doing on your theme for 2015? Are you sticking to it or do you need to get back on track? Share your progress in the comments below!